Being locked in solitaire.

Get revenge on the man who destroyed his mind and lead to his friends' death.

Mr. Grimm is playable character in Twisted Metal: Black. He is a former soldier who thirty years prior to the game was drafted into the Vietnam War which had drastic consequences on his psyche. Due to his past Mr. Grimm has suffered from several mental issues and seeks to win the contest so he can get revenge on the man that caused it.

When Mr. Grimm turned eighteen he and his best friend Benny were forcibly drafted to go fight in Vietnam, the two were even put in the same platoon and despite not being prepared for the harsh reality of war they tried to protect one another above all else. Eventually they were ambushed which resulted in Benny being fatally wounded and Mr. Grimm begging for help until both were knocked out. When Mr. Grimm woke up he found himself trapped in a hole 25 feet deep, desperate to save his friend Grimm screamed for medical help only to eventually meet the Vietnam advisor who mocked them by saying if either wanted to survive they'd have to eat whatever they could before throwing down a knife. Mr. Grimm knew the advisor wanted him to kill Benny for food but refused. Eventually Benny died of his wounds and Grimm reluctantly was forced to eat his fallen friend's corpse, as a way to keep his friend close Grimm created a helmet out of his friend's skull. When a rescue team eventually came to save him they tried to forcibly take Grimm's helmet resulting in most being killed before they were able to get him back to America. For the next thirty years Mr. Grimm was locked away in Blackfield Asylum under strict surveillance and placed on an exclusively vegetarian diet.

After all those years Calypso shows up and offers him a chance at revenge against the cruel advisor that ruined his life but only if he won the contest. Seeing it as the only way to finally get his revenge and even his freedom Mr. Grimm agrees and enters the contest. In his ending Mr. Grimm arrives and learns that Calypso is a man of his word by having the advisor captured. Calypso knowing that Mr. Grimm has been secretly craving human flesh, gives the veteran an axe claiming as a bonus he could eat the cruel avdisor to which Mr. Grimm did with great satisfaction.

Mr. Grimm is shown to be a man haunted by his past even mentioning he is constantly having visions of his time Vietnam, the patient profile also directly states he suffers from PTSD (Post-Traumatic Stress Disorder) with Mr. Grimm going as far to admit he never was willing to talk about what happened. Mr. Grimm also admits in loading screens that he truly regrets having to eat Benny to the point he mentions at times he wish he'd of just let himself starve and hopes that Benny forgives him. Despite the fact he regrets the act of eating Benny, Mr. Grimm begrudgingly admits he's been craving human flesh and wonders if he's truly become insane as a result. Above all else, Mr. Grimm is portrayed as a violent and vengeful individual who will go to great lengths to avenge his fallen friend. 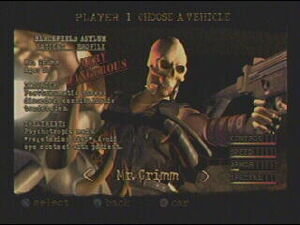 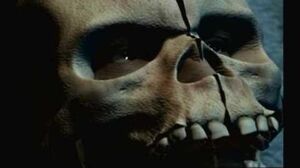 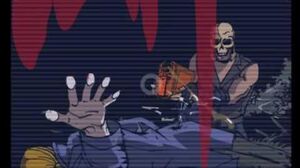 Mr. Grimm
Add a photo to this gallery

Retrieved from "https://villains.fandom.com/wiki/Mr._Grimm_(Twisted_Metal:_Black)?oldid=3456885"
Community content is available under CC-BY-SA unless otherwise noted.