Mr. Happy Face is the villain protagonist from FilmCow's video of the same name. He is originally a cartoon character that gets teleported in the real world, but he reveals to be not so friendly as his name seems to imply.

Little Timmy is alone at home watching the Mr. Happy Face children's show on TV when lightning strikes the aerial and Mr. Happy Face mysteriously appears in the house.

When Timmy asks him if he wants to be his new friend, Mr. Happy Face pulls out a knife and starts chasing the kid through the room in order to kill him.

Timmy manages to hide temporarily; in the while, Mr. Happy Face kills the family dog, and when he finally finds the defenseless kid, the evil cartoon character stabs him to death with a psychopathic smile on his face. 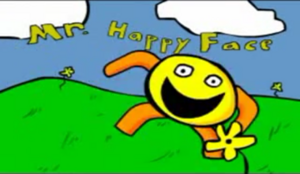