Mr. Hinx is a major antagonist of the 2015 James Bond film Spectre. He is a high-ranking member of SPECTRE who acts as an assassin for Ernst Stavro Blofeld.

Mr. Hinx is the extremely hulking second-in-command of Franz who has a beard and buzzcut hair. His signature weapon is a double barreled Arsenal Firearms AF2011 Dueller Prismatic which is strong enough to rip the hull of Bonds plane. He also posses metal thumb nails to pierce through his victims' eyes. When Bond infiltrates the SPECTRE meeting in Rome and flees after being spotted, Hinx chases him through the streets of Rome in his Jaguar C-X75. He is immensely strong and also tremendously durable, capable of smashing through walls and enduring huge amounts of physical pain completely effortlessly. He is also very capable in a fight, nearly killing Bond in Africa.

Mr. Hinx was an assassin working for SPECTRE during the film. He is first introduced during the SPECTRE meeting in Rome, and displays his exceptional brutality and skill in combat by crushing his predecessor's eyes then breaking his neck with his bare hands. When Franz Oberhauser exposes James Bond eavesdropping on the meeting, Hinx chases after Bond in a Jaguar C-X75 as the latter tries to escape in his Aston Martin DB10.

Hinx chases the spy through the streets of Rome in an exciting car chase, where Bond tries to use all of his weaponry built into his car to fight off the assassin (easier said than done, as most of said weapons lack ammunition). Hinx corners Bond's car near a river, where Bond incinerates the bonnet of his pursuer's car to slow him down. At the end of the chase, Bond drives his car into the Tiber River, faking his death. Hinx is forced to stop, having lost the chase, but notices Bond escaped via an ejector-seat.

Hinx hunts Bond throughout the film, narrowly missing the spy when he reaches Mr. White's house in Austria. He is then deployed to arrest Madeleine Swann (Mr. White's daughter), provoking Bond to chase after him in a plane. An intense chase breaks out between three jeeps, Hinx and Swann in one of them, that splits through the Austrian mountains and destroys a myriad of buildings in the process. Bond eventually catches up with Hinx, and attempts to collide with him. Hinx goes off course and crashes into a nearby house, where he apparently dies. However, he is revealed to be truly unconscious, despite immense critical injury sustained in the crash. However, him and Dr. Swann are the only survivors out of the jeep occupants.

Hinx then appears for a third time on Bond's train journey through Africa where he ambushes Bond and Swann in the middle of a meal. He throws Bond through several carriages and rooms, but Bond fights back and a brutal fist fight breaks out. Bond tries to defeat Hinx by attacking him with a knife, a tray, a crate and a wine bottle but all of them are entirely ineffective. Eventually Hinx's sheer strength overpowers Bond and Hinx is about to throw him out of the driving train. Bond is saved by Swann who shoots Hinx in the shoulder, causing him to dive for cover. When Swann's gun is empty, Hinx attacks her and tries to strangle her but Bond attacks again, attaching a chain between Hinx and a series of barrels, before pushing the barrels off the train. One by one, the crates fall off, slowly overpowering Hinx as he falls off with the latter after noting a simple "Shit." as his only spoken line in the film, presumably killing him.

Hinx arriving at the SPECTRE meeting. 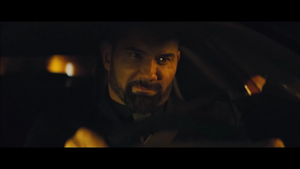 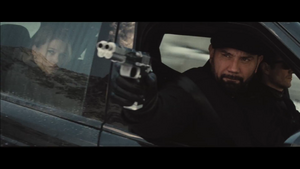 Hinx about to shoot Bond's plane.

Bond leaving an unconscious Hinx, believing him to be dead. 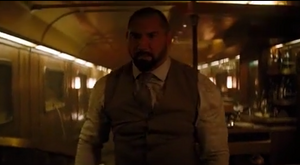 Hinx during his last fight with Bond.

Hinx fighting Bond in the train.

Hinx shortly before his presumed death.