Mr. Hippo is a character from the video game Freddy Fazbear's Pizzeria Simulator. He is an animatronic entertainer who takes an antagonistic role in the game Ultimate Custom Night.

He is voiced by Joe Gaudet.

Mr. Hippo is one of the animatronics that can be purchased through the catalog for the pizzeria. He is found categorized under "Stan's Budget Tech" and can be bought for $190. He is needed to complete the "Medicore Melodies" set.

Mr. Hippo is one of a couple of animatronics that will try to get into the office through the overhead air duct system. The Player can stop Mr. Hippo from doing this by repelling him using the heater or by luring him away with the audio lure, which is guaranteed to work. In comparison to other air duct animatronics, Mr. Hippo is slightly faster than Happy Frog, but slightly slower than Pigpatch. If he catches the player, he will start a long monologue, unlike the other animatronics who will only say a single sentence.

As his name suggests, Mr. Hippo is a purple anthropomorphic hippopotamus with blue eyes. He has two black buttons placed under a large red flower on his torso and wears a small black top hat on his head similar to Freddy Fazbear.

Despite being a murderous animatronic bent on killing the player, Mr. Hippo does not seem to hold a grudge against him. He may even apologize for the player's demise. Although he believes things "could only end this way" between them and he "doesn't feel too bad about it". Mr. Hippo is then reminded of a story that he will tell to the player, perhaps as a way of showing there are no hard feelings.

However, he has a strong tendency to overanalyze his words and sentences, resulting in his stories being minutes long. Mr. Hippo also tends to get philosophical over situations he explains in his stories which doesn't help the tales' length. He claims to be good friends with Orville Elephant and has done some different activities with him, such as having picnics or feeding birds. But because they are both animatronic entertainers, it is unknown if either of them have actually done these activities. It is more likely that these events are just fake memories fabricated by Mr. Hippo's mind, as he genuinely seems to believe that they happened. 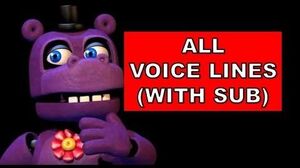 Retrieved from "https://villains.fandom.com/wiki/Mr._Hippo?oldid=3402702"
Community content is available under CC-BY-SA unless otherwise noted.