Mr. Hopp is a toy rabbit that was given to Ruby by Esther (Ruby's grandmother). Prior to Esther's death, the rabbit mysteriously comes to life one night and goes on a murderous rampage around the child protagonist's home, killing her parents and stalking her across the house, forcing her to engage in a deadly game of hide and seek in which she must continually evade the monstrous rabbit, who has grown into a human-sized rabbit with sharp fangs.

During her travels around the house, Ruby uncovers more about the origins of Mr. Hopp via old tapes found around the house, which explains that Esther was becoming increasingly unhinged in her final days, eventually forcing her to be admitted into hospital due to mental unrest. It is revealed via an ominous message on the wall that Esther was actually driven mad by Mr. Hopp, who also likely caused her death in hospital.

Eventually, Ruby manages to find the combination for her father's safe and obtains a slingshot (in the game's previous version it's a gun) which she uses to pursue Mr. Hopp into the basement, where he tries to attack her via a slow and lumbering walk, only to fade into shadows after being shot several times.

However, this does not stop Mr. Hopp as the demon takes the form of the deceased Esther to lower Ruby's guard before transforming into a gigantic monster and pursuing her again to play with him.

Ruby manages to escape the home just before the demon can capture her and she seemingly finally rids herself of his evil presence, though at a high price as armed police arrive and take her away. The last scene depicts a crime scene investigator picking up Mr. Hopp who is once again a seemingly harmless toy.

Ruby manages to escape and is taken away by the police. She looks up her bedroom window while in the police car to see Mr. Hopp sinisterly grinning at her.

If Ruby manages to pick up a lighter and gas during the game, she'll be able to light up a piece of cloth and burn down the house as the game progresses. After escaping the house, Ruby will watch as the house burns down with Mr. Hopp pleading and begging her to save him.

After discovering the murder of her parents, Ruby decides to go to bed and when she does so, Mr. Hopp looms over her bedside and presumably kills her.

Mr. Hopp is a demonic entity with many different abilities, despite the relatively simple nature of the game Mr. Hopp displayed a wide array of powers such as: 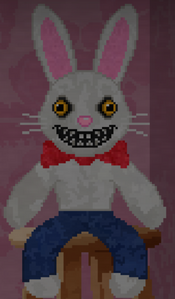 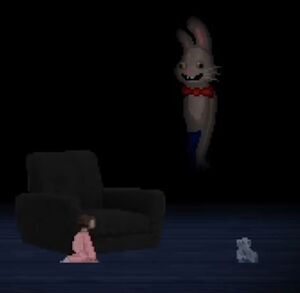 Mr. Hopps in his humanoid form. 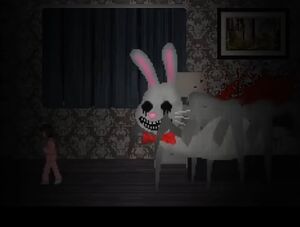 Mr. Hopps as a spider. 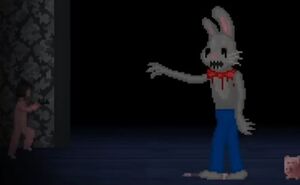 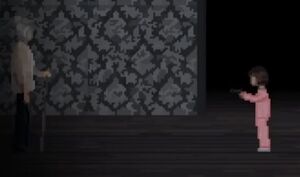 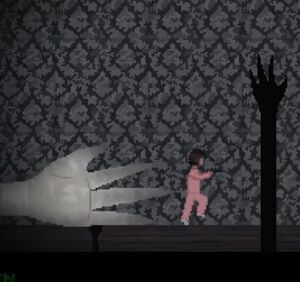 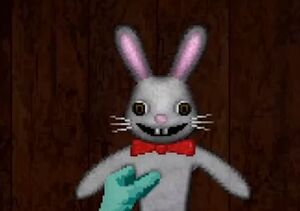 Mr. Hopps as a normal toy.
Add a photo to this gallery

Retrieved from "https://villains.fandom.com/wiki/Mr._Hopps?oldid=3898483"
Community content is available under CC-BY-SA unless otherwise noted.