Member of the Loveless Alliance

Mr. Hudson is a supporting antagonist of the 1999 film Wild Wild West. He is a henchman of Arliss Loveless involved in the Loveless Alliance's plot to overthrow the United States government and divide the nation amongst themselves.

He was portrayed by Rodney A. Grant.

Mr. Hudson first appeared in a saloon bar with the notorious ex-Confederate general Bloodbath McGrath, as they have McGrath's soldiers to deliver cases of nitroglycerin to an arriving Loveless and his mistresses (Munitia, Amazonia, Miss Lippenrieder & Mai Lee East).

However, two officers named Artemus Gordon and James West intervene while attempting to detain McGrath (to no avail), forcing Loveless and his men to ditch the scene, but not before they destroy the nitroglycerin supply to cover their escape.

Assigned by President Grant to work together, Gordon and West track down McGrath's current location in New Orleans, where Loveless is hosting up a costume party for the elite of Southern society. Following the death of Miss East, Munitia and the other ladies oversee the unveiling of Loveless' new weapon: a steam-powered tank, which Mr. Hudson personally uses to massacre all of McGrath's soldiers under Loveless's orders.

Following McGrath's death at the hands of Loveless, Mr. Hudson helps round up the tank into Loveless' train as he and the others head over to Spider Canyon to finalize their plot. The next day, Gordon and West and following behind Loveless' train, but Loveless uses the hydraulics to maneuver behind the officers' train. Using one of Gordon's invention known as the vehicular eggressor, West manages to board Loveless' train with the intention to destroy it.

However, anticipating this, Mr. Hudson climbs up to the top and strangles West with a high-tensile wire, intending to finish him off. Fortunately, West uses a blade fitted inside his boot (thanks to Gordon) to stab Mr. Hudson in the chest, killing him instantly. West then stuffs Mr. Hudson's corpse into the smokestack, causing a chain reaction that severely damaged Loveless' train, much to the anger of Loveless and his mistresses. 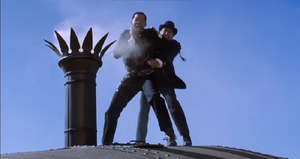 Mr. Hudson strangling West with a wire on top of Loveless' train. 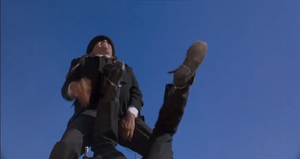 Mr. Hudson stabbed to his death by West's boot blade.
Add a photo to this gallery

Retrieved from "https://villains.fandom.com/wiki/Mr._Hudson?oldid=3542859"
Community content is available under CC-BY-SA unless otherwise noted.