Mr. Arnold Hugh is the main antagonist in the classic Aardman animated short "Stage Fright". He was an abusive actor, theater runner, the former boyfriend of Daphne and Tiny's former master.

He was voiced by Graham Fellows.

Mr. Hugh has had Tiny be living with him for many years as part of a deal for the latter to perform his dog acts earning Tiny the nickname Dog Man. He forces Daphne to promise not to reveal to the public what he had been doing to Tiny or to Tiny himself that he stole one of his dogs whilst the two are successful theatre, soon to be movie actors.

Sick of all of his abuse, Tiny orders the dogs to tear apart Arnold's hat. Arnold walks into the room whilst this is happening causing Tiny to fall backwards in fear tripping over a paint bucket and getting caught by a loose beam. The two discuss Tiny's "betrayal" to which the latter tells Arnold he drove him to it. This prompts Hugh to tell him he'd been looking after him all of these years.

Daphne appears and knocks Hugh over with a sandbag, infuriating Hugh over Daphne breaking her promise to not tell Tiny about his abuse on him. Mr. Hugh then proceeds to strangle her.

The dogs then gang up on Mr. Hugh, annoying the latter and causing him to repeat the same thing again. Mr. Hugh attempts to attack Tiny's dogs and Daphne with a key, but he's killed when the falling film screen knocks him on the head. After Tiny's death fake out a ghostly musician rises from the pit with Tiny, and beckons Mr. Hugh's body. Mr. Hugh's ghost rises from his corpse and walks over to the organ. The ghostly musician says, "Going down.", then he, Mr. Hugh’s ghost, and the organ descend into hell via the pit with Mr. Hugh's ghost silently shrieking in fear as he descends. 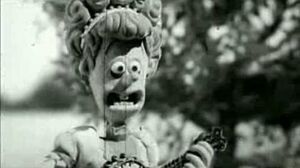