Murderous Alter-Ego
Mr. Hyde, real name Dr. Henry Jekyll, is a minor antagonist in the 2004 dark fantasy horror action film Van Helsing. He also appeared in the animated prequel film Van Helsing: The London Assignment as the main antagonist and is the first boss in the video game adaptation. Once a scientist, Dr. Jekyll was turned into the evil Mr. Hyde upon a series of experiments and potions he created.

The origins of this version of Hyde are revealed in the animated prequel called The London Assignment. Many years before, the young Jekyll had fallen in love with the new queen, Victoria, from afar. In order to be with her, he studied the occult for many years. But by that time, Victoria had grown old and bore several children. Seeking a way to make her young again, Jekyll used his magic to change himself into Hyde and used an occult process in order to steal the youth and beauty from young women, which resulted in their deaths. His string of killings attracted the attention of Van Helsing. When he had defeated Jekyll's plans, Jekyll fled to France, setting the stage for the final confrontation. Dr. Jekyll had committed a series of murders at London as Jack the Ripper. Van Helsing tracked him down as Mr. Hyde left and gone to Paris.

At the beginning of the film, Van Helsing traveled to Paris hunting Dr. Jekyll. A woman screamed and Mr. Hyde's laugh is heard and the monster hunter discovers the woman's corpse picking up a smoldering cigar stub. Van Helsing spots a huge shadow climbing up the North Tower of Notre Dame. Van Helsing then goes to Notre Dame and meets Hyde inside the bell tower. Mr. Hyde tells the hunter he will be hard to digest and Van Helsing apologizes. Van Helsing tells Hyde that he missed him in London, but the huge brute states he didn't and raised his arm showing three bullet holes in it. Van calls the huge brute Dr. Jekyll but Hyde interrupts telling the hunter that he is Mr. Hyde now. Van Helsing tells him he is wanted by the Knights of the Holy Order for the murder of 12 men, 6 women, 4 children, 3 goats and a number of poultry.

Van Helsing tells Mr. Hyde that the Order has deliberately ordered him to bring Hyde alive in order to extricate his better half but the hunter preferred to just kill him instead but gave Hyde the choice. The monster refused starting to fight slapping Van Helsing across the face and slams hard into a wall. Van Helsing started to shoot at Mr. Hyde with his revolvers but misses him and the brute comes charging at the hunter. Van Helsing pulls out circular blades and cuts Hyde across the ribs as he passes by and he howls in pain running straight into the bell. Van Helsing then moved in for the kill with the spinning blades but Hyde grabbed the bell ripped it off and slammed it over Van Helsing, trapping him inside. Mr. Hyde then heard noises inside the bell and lifted the bell to find Van Helsing gone but the monster hunter was hiding inside and swung a blade cutting Mr. Hyde's left arm off. Enraged, Hyde threw Van Helsing through the tower onto the rooftop. Mister Hyde then picked up Van Helsing by the collar and carried him across the roof and prepared to throw him off after bidding Au Reviour.

Mr. Hyde then threw the hunter off the top of Notre Dame. Van Helsing fired his grapple gun through Hyde's gut which broke his fall and tried to pull him over. Hyde was jerked forward but caught himself on the ledge. Mister Hyde counterattacked and pulled Van Helsing back onto the roof but failed to look where he was going and toppled over the side and swung through the church and shattered the rose window. The transformation formula then started to wear off as Mr. Hyde turned back into a meek old Dr. Jekyll who then died from his fall. The public then gathered around Dr. Jekyll's corpse before a police sergeant noticed Van Helsing above and raised an angry fist calling him a murderer. Cardinal Jinette was displeased with Van Helsing for being unable to bring Mr. Hyde back and for shattering the rose window, but Van Helsing insisted that the shattering was Hyde's doing. 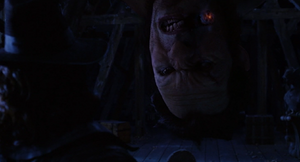 A gigantic malformed man drops down hanging upside down from the rafters snarling. 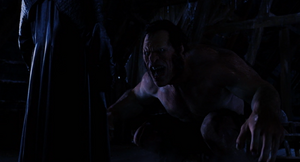 Mr. Hyde flips around and lands on his gnarled feet. 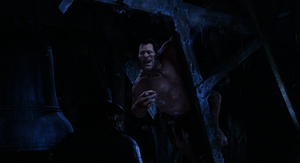 Hyde starts to circle, Van Helsing does the same. 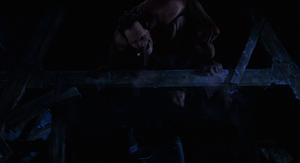 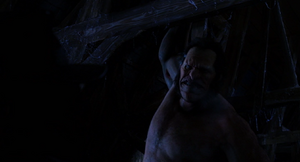 Mr. Hyde hangs from the rafter with one arm. 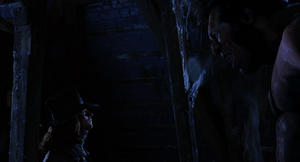 Mr. Hyde blows a huge smoke ring at Van Helsing who ignores it. 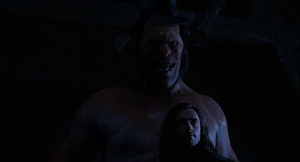 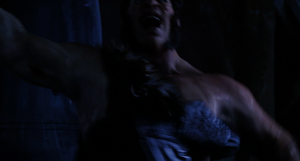 Mr. Hyde lashes out with one of his huge hands slamming Van Helsing into a wall. 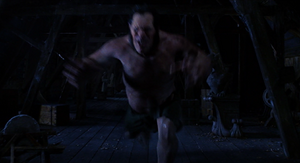 Hyde suddenly charges out of the darkness and Van Helsing manages to slice him and Hyde crashes straight into the huge church bell. 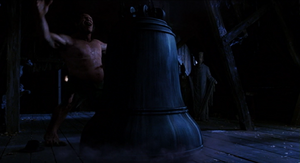 Mr. Hyde grabs the huge bell, rips it off its moorings and slams it down over Van Helsing, trapping him inside. 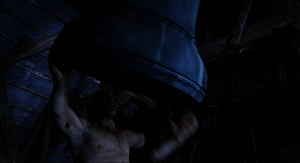 Hyde picks up the bell and sees Van Helsing crouched up inside and swings a blade chopping off Mr. Hyde's arm. 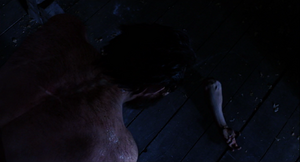 Mr. Hyde's left arm drops to the floor, flapping away until it transforms from a huge arm into a spindly old one. 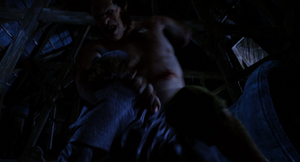 Mr. Hyde angrily lunges forward, grabs Van Helsing and throws him clear up through the roof. 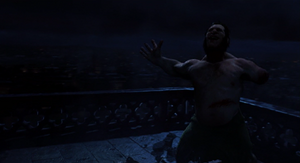 Hyde leaps up beside Van Helsing and basks in the ambience of Paris. 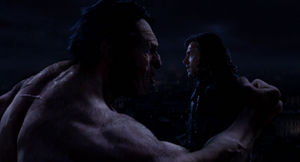 At the edge of the tower, Mr. Hyde lifts Van Helsing up face-to-face before throwing him off the top of Notre Dame. 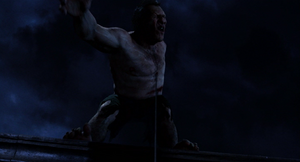 Van Helsing whips out a grappling hook gun and fires a bolt right through Hyde's belly. 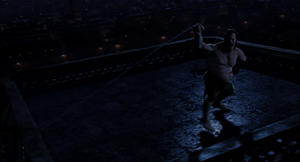 Mr. Hyde pulls on the rope but stumbles back and falls off the rear of the tower. 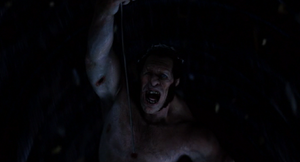 Mr. Hyde swings down across the great church. 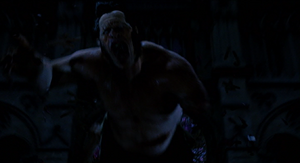 Mr. Hyde crashes through the massive Rose window at the front and center of Notre Dame explodes as Hyde crashed through it. 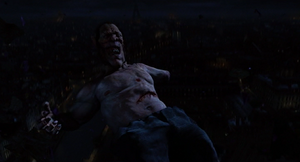 As Mr. Hyde falls, he begins to transform. 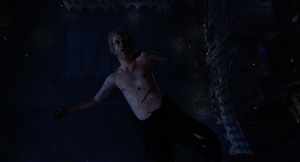 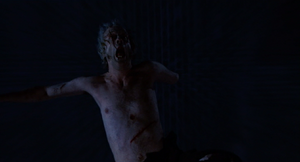 Dr. Jekyll has one deeply disturbing moment to consider his predicament before hitting the pavement. 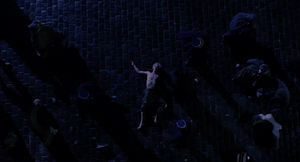 The crowd race and gather around Dr. Jekyll's body. 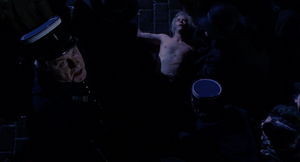 Dr. Jekyll's corpse lays on the ground as a police sergeant calls Van Helsing a murderer.
Add a photo to this gallery

Retrieved from "https://villains.fandom.com/wiki/Mr._Hyde_(Van_Helsing)?oldid=4196622"
Community content is available under CC-BY-SA unless otherwise noted.