Protector of the Pharaoh's tomb.

Maintain the legacy of the Tombkeepers

Abusive Fanatic
Mr. Ishtar is the father of Marik Ishtar and Ishizu Ishtar, and the adoptive father of Rishid Ishtar. He is a minor antagonist in Yu-Gi-Oh!. Despite only being seen in flashbacks, he is considered an important antagonist, as his actions were responsible for the creation of Yami Marik, the Bigger Bad of the Battle City arc.

He was voiced by David Wills.

Mr. Ishtar was the tombkeeper of the Pharoh who guarded the melenium rod. He also had a wife who appeared to be infertile, which angered him because he needed to male heir to continue the tombkeeper duties after him. One day his wife found a baby boy left in the ruins by their underground home, though he apparently allowed her to keep the child and raise him, he personally never saw Rishid as  part of the family or cared for him the slightest. When Rishid was still young he and his wife talked about needing to heir, though Mr. Ishtar was reluctant to name Rishnid his heir as tradition required that a blood child though he reluctantly agreed to do so if they did not have a son by his twelvth birthday. Some time later his wife bore a daughter she named Ishizu, though disapointed that it wasnt a son, Mr. Ishtar was happy to see that he and his wife could bear children and proclaimed that all they needed now was a boy.

Years later Mrs. Ishtar sadly died giving birth to Marik. Her husband showed no sadness about this because he now had an heir. With a true heir and his wife dead he then reduced Rishid to a slave and would treaten him with death or injury for failures. When Marik was bitten by a raddle snake while under Rishnid's watch he berated the boy for his lack of caution and ordered him to stay by Marik's bedside until he was better, while threatening to kill him for future incidents. When Marik turned twelve and he was to be prepared to take the duties as tombkeeper, which required him to have the pharohs story carved into his back, Rishnid approached Mr. Ishtar and told him how terrified Marik was and begged to take his place as tombkeeper, however Mr. Ishtar was unmoved and stated that Marik will go through with the ritual and threatened to cut off Rishnids tongu if he spoke another word on it. He would later go on to sadistically carve up his son's back as an ancient ritual, and the anger and hate Marik felt towards his father would eventually form Yami Marik. Later Rishnid had his face carved to resemble the ritual as well, both to ease Mariks anger and show his dedication to the family, but Mr. Ishtar was once again unmoved by Rishnids dedication and ordered him to cover his face. When Marik and his sister Ishizu snuck out (which was strictly forbidden to do) and his father found out, he was about to banish Rishid after torturing him with a heated blade (or whip) (or weakening him with the Millennium Rod in the anime), when Yami Marik took over Marik's body, took the Millennium Rod and stabbed Marik's father to death (while in the 4Kids version, he sent his father to the Shadow Realm though there is little difference between death and being banished to the Shadow Realm). 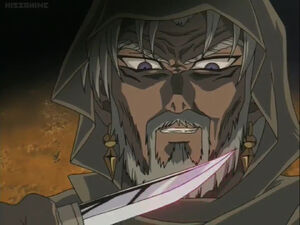 Retrieved from "https://villains.fandom.com/wiki/Mr._Ishtar?oldid=3246609"
Community content is available under CC-BY-SA unless otherwise noted.