Retrieve the CPH4 to gain artifical power (both failed).

Mr. Jang is the main antagonist of the 2014 action sci-fi film Lucy. He is a Korean kkangpae boss and drug lord who killed Lucy's boyfriend and put the CPH4 in her abdomen which soon led her to develop superhuman powers and the 100% full capacity of the human brain.

He is portrayed by Choi Min-shik who played Jang Kyung-chul in I Saw the Devil.

Mr. Jang is the employer of Richard who tricked his girlfriend Lucy who was a American student who studying in Taipei, Taiwan, into delivering a briefcase to Mr. Jang containing a highly valuable synthetic drug called CPH4 which Jang and his gang hide it. But when Richard refused, it caused Jang to shoot him dead in front of Lucy at a window. Lucy is then captured by Jang's men and a bag of the drug is forcibly sewn into Lucy's abdomen and that of 3 other drug mules who will also transport the drug for sales in Europe. While Lucy is in captivity, one of her captors kicks her in the stomach, breaking the bag, releasing a large quantity of the drug into her system. As a result, she begins acquiring increasingly powerful and enhanced physical and mental capabilities, telepathy, telekinesis, mental time travel, and she can choose not to feel pain or other discomforts, in addition to other abilities. She kills off her present captors and escapes.

Lucy returns to attacked and killed Jang's henchmen and bodyguards, nailed his hand to the chair he was in with knifes, and read his mind to locate the other drug mules. Jang is wanted by police for drug smuggling and murders. In the climax, when Lucy come face with Jang who pointed her head with his gun right before she reached 100% and vanished. In his confusion, Pierre Del Rio came in and fatally shot Jang for good. 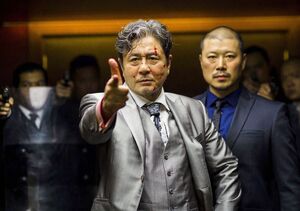 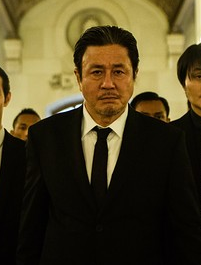 Add a photo to this gallery
Retrieved from "https://villains.fandom.com/wiki/Mr._Jang?oldid=3550929"
Community content is available under CC-BY-SA unless otherwise noted.