Make his animals starve for food

Regain his farm back (both failed)

Mr. Jones (or simply Jones) is the overarching antagonist of the novel Animal Farm by the late George Orwell and it's animated film adaptation.

He is the original owner of Animal Farm. He is portrayed as a cruel and drunken old farmer who has turned to drink and created misery for himself. He is also very brutal, despicable, and argumentative towards his own animals whom he abuses and enslaves. Furthermore, he keeps all of the food locked away in a barn, so the animals can starve.

In the 1954 animated film adaptation, he was voiced by the late Maurice Denham (although the character was mostly silent), who also provided the voices for all of the other characters, including Napoleon and Squealer. In the 1999 live action film adaptation, Mr. Jones was portrayed by the late Pete Postlethwaite, who also played Kobayashi in The Usual Suspects and Obadiah Hakeswill in Sharpe.

Mr. Jones is the original owner of Manor Farm. The novel notes that Jones was originally a very capable, hard-working man, but turned to drink owing to problems in his life. He is married and his wife does her best to support him, hoping in vain that he will reform. Jones' animals have come to hate him due to his cruel nature and negligence, especially his refusal to feed them. The morning after Old Major's passing the animals, inspired by the old boar's words, decide that they have put up with Mr. Jones long enough. They break into the barn, awakening the Farmer is awoken who rushes outside to find the animals feeding in the barn.

Enraged, Mr. Jones started to whip them with his rawhide. The animals do not back down, however, and advance upon him in anger no matter how many times he whipped them. Seeing the hostility in the beast's eyes, the cowardly Jones fled from Manor Farm, along with his wife and workers. After the animals succeeded in overthrowing him, Mr. Jones rushed to his local inn the Red Lion.

There, he rallied all of his friends and fellow farmers into a mob, in an attempt to take back the newly christened Animal Farm. However, one of the pigs, Snowball, organizes a clever defense, which leaves the animals victorious. This display of organization and bravery left all of the farmers, including Jones terrified. Eventually, the humans fled in defeat and Jones never attempted to reclaim the farm ever again.

Ultimately, this proved to be the animal's final encounter with their former owner. Jones eventually died, unceremoniously, in a home for alcoholics at some point after the battle. By the end of the story, he has been largely forgotten. Most of the animals that knew Jones have passed on and the few that remain do not like to talk about him. The books ending makes it clear that unfortunately, the animals simply traded one tyrant for another.

Jones portrayal in the first half of the movie, was generally consistent with that of his novel counterpart. Unlike his novel counterpart, this version of Jones does not appear to be married. Whilst he still dies, the manner of his death deviates from that of the book.

Following the original battle, Jones returned to the Red Lion and presumably stayed there. Along with his friends, Jones did not know what to do and was confused as to how the animals expected to run the farm. The group initially assumed that it would all end in failure. They soon discovered, however, that a man called Mr. Whymper, managed to make a deal with Napoleon and the other pigs. The opportunistic merchant was now making lots of money from the animals running the farm.

Seeing this, the enraged farmers decide that they have put up with this nonsense long enough. Rallying together, they prepare to launch a second attempt at recapturing the farm. The clearly intoxicated Jones offers to help but is rejected. His fellow farmers, blaming him for this entire mess, let Jones know that his days running a farm are over.

Jones' neighbors armed themselves, then marched on Animal Farm. Napoleon received word of this and began marshaling his own forces. Unknown to either side, Jones entered a warehouse from which he took several sticks of dynamite. He then secretly followed the humans in the direction of his old residence.

As the two sides engaged one another, Jones' target was revealed not to be the farm itself but the symbol of the animal's defiance, their windmill. Taking advantage of the situation he managed to enter the building unopposed. After planting the dynamite and lighting the fuse, Jones made no attempt to escape. Whether this was due to his drunkenness or an imbecility suicidal desire is not clear, but the former seems more likely.

Jones was last seen, enjoying one final drink. The windmill exploded moments after the animal's victory over the human forces. Whilst it is not confirmed that Jones was still inside, it is heavily implied that he was killed in the explosion.

Towards the end of the film, the animals eventually rebuilt the windmill. Under the pig's leadership, however, things became even worse for the rest of the farmyard animals. When Benjamin the donkey spied through the window, he saw several pigs (including those from other farms) celebrating on operating farms everywhere. After hearing Napoleon's totalitarian declaration, he visualized them all as Farmer Jones, because to him the pigs were now indistinguishable from their original cruel master.

Mr. Jones was portrayed as a questionable weakling and he asked other farmers for money, but the farmers see him as a total disgrace. His wife tried to get him to do his job, but Mr. Jones ignores her. 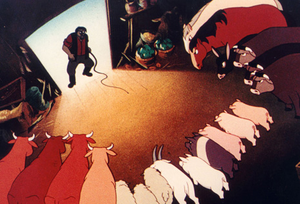 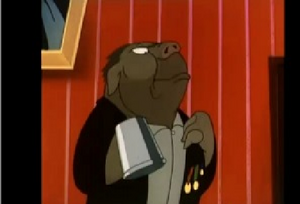 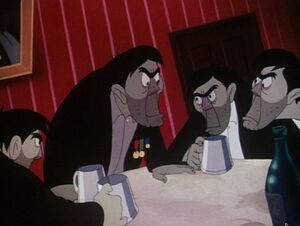 Benjamin visualizing all of the pigs as Mr. Jones.
Add a photo to this gallery

Retrieved from "https://villains.fandom.com/wiki/Mr._Jones_(Animal_Farm)?oldid=4144491"
Community content is available under CC-BY-SA unless otherwise noted.