Collect toys for his master Ron and obey any commands that Ron orders him to do without so much as a pinch of question (formerly).

Mr. Jones is an iguana and the (former) secondary antagonist-turned-anti-villain of the 2013 Halloween television special Toy Story of Terror!.

Though he is an iguana, Mr. Jones acts more like a dog. He follows his training by his master Ron closely, even inadvertently exposing his toy-napping scheme to Bonnie and her mother by doing so though it is implied that he sold him out to the two women. He finally turned from bad to good from the moment he sold Ron out upon ringing the bell that exposed his owner and defecting when he was sent to live in an iguana sanctuary and is no longer considered loyal to his master.

Mr. Jones is a pet iguana formerly owned by Ron, the manager of Sleep Well. Ron trained him to retrieve toys from visitors and bring them to his office, where he placed them in a basket and rang a bell to alert Ron.

When Bonnie Anderson and her mother arrived at the hotel for the night, Mr. Jones (after a period of time) brought the entire toy gang along with Combat Carl and Jessie (whom Mr. Jones found hiding behind a shower curtain that he slashed with his claws), eating one of Mr. Potato Head's arms in the process. After Mr. Jones rang Ron's bell to alert the owner of his success, Ron praised his pet lizard before locking Jessie in a cabinet with the other stolen toys.

Mr. Jones then proceeded to rest until he saw Jessie (who managed to escape) sneaking toward the curtain hiding Ron's scheme. He attacked her, but after she noticed Mr. Potato Head's arm and Combat Carl's hand (which Mr. Jones had eaten sometime before the main events of the story) in the back of his mouth, she kicked the lizard's stomach, forcing him to cough up Combat Carl's hand, then pushed her head and arm inside his mouth, retrieving Mr. Potato Head's arm before escaping.

With the help of Mr. Potato Head's arm, Jessie tricked Mr. Jones into yanking off Ron's curtain, revealing his scheme to Bonnie and her mother. After Jessie froze because of the presence of the humans, Mr. Jones retrieved her and brought her to the basket before ringing Ron's bell, further exposing his owner and triggering his redemption thus he sold Ron out to the two females. Later, Ron fed him with a dog dish, which he proceeded to eat, just as two police officers arrived to arrest his owner for theft. It is unknown what happened to him afterwards, though according to the commentary on the DVD, he was to be sent to live in an iguana sanctuary called Iguanaland and thus is no longer considered a villain to the date.

He is said to be Toy Story That Time Forgot. 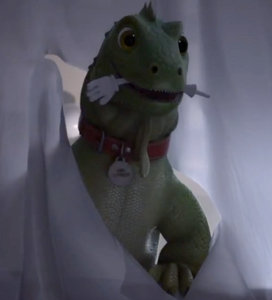 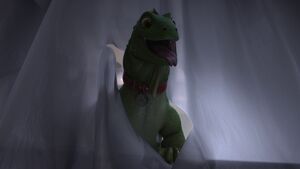 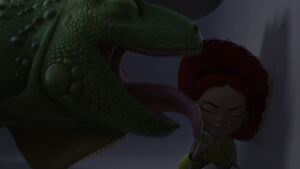 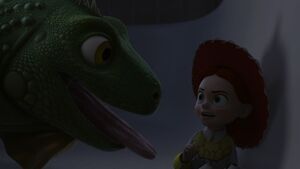 ...very much to Jessie's annoyance. 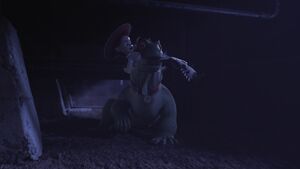 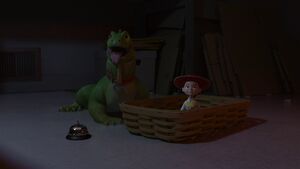 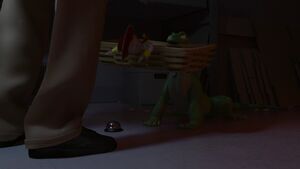 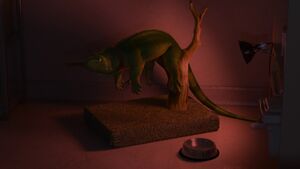 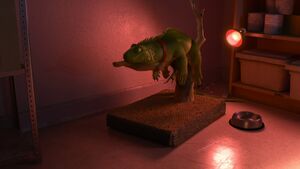 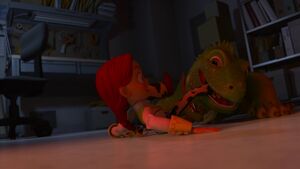 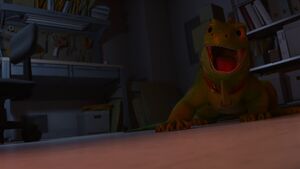 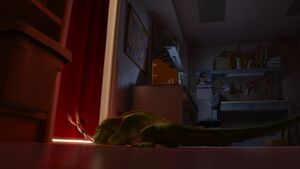 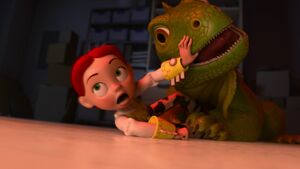 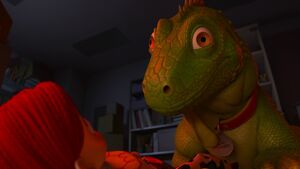 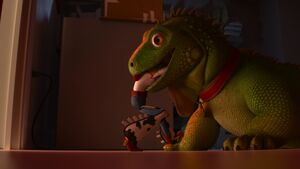 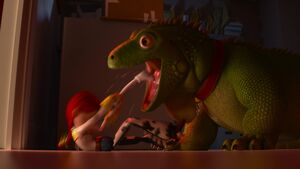 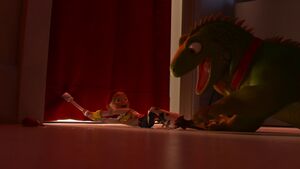 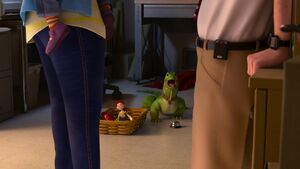 Mr. Jones selling Ron out to his attempted pawns completing his redemption 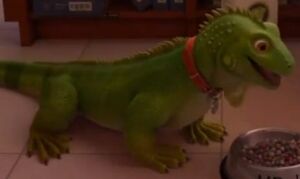 Retrieved from "https://villains.fandom.com/wiki/Mr._Jones_(Toy_Story)?oldid=3775546"
Community content is available under CC-BY-SA unless otherwise noted.