Return to his home planet with Fishy Frisky Bits.

Incompetent Animal Archenemy
Mister Kat (or known as Kat and Agent 27B) is the protagonist villain of the show Kid Vs. Kat.

He is voiced by Kathleen Barr.

He is a cat-like alien from a distant planet called Catnip and his species are called Katnipians. He was sent down to Earth to collect a brand of cat food called Fishy Frisky Bits and give his companions a chance to take over Earth, because his planet is so polluted that its inhabitants need to colonize a new one. Kat's physical appearance can be likened to that of the hairless Sphynx cat. He has a cybernetic body and numerous superpowers, such as steel claws, heat ray, heat emanation, heat vision, intelligence, acid spit, claw blades, steel fangs, pulse manipulation, extendable tail, mold, x-ray vison, super strength, defy gravity, invulnerability, and super speed. Kat is also shown to put on weight very quickly whenever he consumes food with fattening properties. Cat food seems to have no weight effect at all. Just like the cats on earth, he hates water and baths.

At first when Millie asked her father if they could adopt the strange-looking animal (supposedly a cat), Burt turned her down, stating that it had a collar on and therefore probably had an owner. He was forced to compromise though, when his daughter threw a tantrum, deciding that she could keep Kat if and only if they couldn't find it's owner.

He was sent to earth mainly to gather Fishy Frisky Bits for his home planet, however he has also planned to take over the world. Kat extremely hates Coop, who usually foils his plans. Coop and Dennis are the only characters on the show who know Kat by his true self, while everyone else sees him as a hideous but normal creature (similar to the Dib and Zim relationship). This provides Kat the opportunity to do things that Coop is usually blamed for afterwards. However, he has occasionally teamed up with Coop and Dennis when his plans go awry.

Kat also seems to dislike extremely reckless chaos though this purely down to not wishing to be discovered, this is most prominent in his confrontations with Mr. Kitten - his rebellious teen son.

Kat is also the focus of intense bullying by his superior Kat Kommander, who frequently harasses him via holographic displays and berates his many "failures". 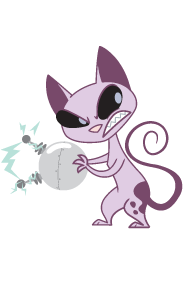 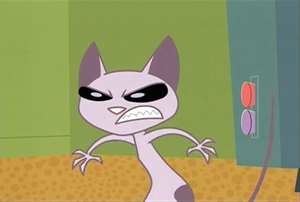 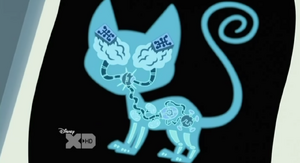 Add a photo to this gallery
Retrieved from "https://villains.fandom.com/wiki/Mr._Kat?oldid=3048841"
Community content is available under CC-BY-SA unless otherwise noted.