Tricking and scaring kids.Playing with his pet dog Spite.

Kill the kids (succeeded, but they came back to life).

Mr. Kreeg is the secondary antagonist in the 2007 cult horror film Trick 'r Treat. He is one of the six characters to be punished by the dead on Halloween night for not following the old Halloween rules, and also by the pumpkin demon Sam.

He was portrayed by Brian Cox.

Macy tells a ghost story about the Halloween school bus massacre. He was a school bus driver who murdered eight mentally disturbed children. The bus driver took a different route from the school and took them to a place where he could poison them and toss their dead bodies into the river, but one of the children was aware of Kreeg's plan and panicked.

The child took control of the bus, but while driving lost control of the it and accidentally drove the bus off a cliff. The children failed to escape the bus and drowned in the lake, but the bus driver survived and gave up his job and took a new name: "Mr. Kreeg".

Mr. Kreeg goes outside to see what is the loud noises coming from outside, Kreeg hears his neighbor Wilkins doing something strange, oblivious to the fact he is burying 2 children, 1 dead and 1 alive, until Kreeg bashed him with a shovel, and he tells Wilkins to keep his son off his yard. Kreeg later goes back inside annoyed. Wilkins sees Kreeg screaming from his window, begging for help, Wilkins disregards this and Kreeg is knocked down by an unknown assailant.

Mr. Kreeg is the main character and victim in this story. Before the events of the other stories in the movie Kreeg is shown scaring away Trick 'r treaters and stealing their candy by dressing up his dog as a monster and attacking them, this leads him to break one of the rules of Halloween and getting the attention of Sam, Sam pulls pranks (tricks) on Kreeg to strike fear into his heart by breaking his window, placing pumpkins on his lawn and a blood writing saying he will kill him. Sam makes multiple attempts to kill Kreeg by stabbing him and breaking his bones, but Kreeg got out alive by following the Halloween tradition giving Sam candy to spare his life.

During the ending he is shown after the attack by Sam, Mr. Kreeg is shown giving candy to trick 'r treaters. Mr. Kreeg sees many of the surviving characters such as Rhonda, Steven's son, and werewolf girls all in the street he lives in. Mr. Kreeg believes he is safe from harm and survived the night but unfortunately for Mr. Kreeg the victims of the school bus massacre came to Kreeg's doorstep seeking vengeance on him for murdering them, the victims rip him apart as Kreeg screams in agony.

A younger Mr. Kreeg during the Bus incident. 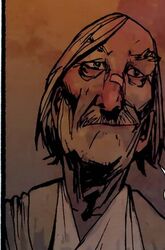 Mr. Kreeg in the comic 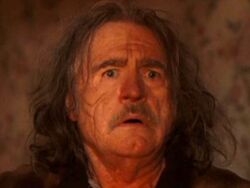 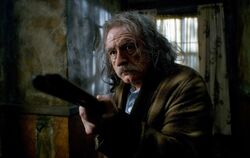 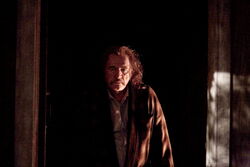