Making deals and converting OSS agents to be his minions.

Mr. Lisp is one of two main antagonists in the first Spy Kids film. He is a ruthless businessman who does not let anyone get in his way to achieve global domination.

He was portrayed by Robert Patrick, who also played the T-1000 in Terminator 2: Judgement Day.

Mr. Lisp later aimed for higher projects—and to this end he aspired for world domination, and hoped to achieve this by brainwashing the next generation: children.

Mr. Lisp went to Floop's Castle and had a business meeting with TV children's show Fegan Floop, but was disappointed with his inventions, (such as Thumb robots and intelligence agents turned into mannequin-like mutant prisoners called Fooglies) so Floop instead showed him his latest invention - Spy Kids, or robot kids, which were android with child-like human appearance. These first 2 Spy Kids presented by Floop, however, looked like Mr. Lisp's own son Johnny and even the U.S. president's daughter, which seemed to confuse him.

He then realized that the Spy Kids lacked their brains (as Minion helpfully reminded Floop) and this enraged Lisp, and he threatened Floop, saying that he would be back within 3 days with his men if he could see Floop had been improving his creations by then. With this ultimatum, he turned to leave, but Floop made sure he had the last word by getting the Spy Kids to grab hold of Lisp and telling them to "take him back to his chopper." The Robots' grip was very strong and hurt Lisp as he was dragged off.

In the three-day interval, Minion revealed himself as Mr. Lisp's lackey and old business partner to an astonished Floop, and betrayed and imprisoned Floop in his own castle. Then Minion proceeded to insert Brains into all the Spy Kids. Meanwhile, Ms. Gradenko, an OSS traitor, had arrived to swell Lisp's ranks. Ms Gradenko then went off to welcome Mr. Lisp and his men and take them into Floop's Castle. Before, Mr. Lisp had contacted Minion via webcam and said that he hoped Floop would have something better this time. Minion had replied that the "fabulous Floop" was away on other business, and he had weapons of mass destruction at his hands. Mr. Lisp gave a sinister look and said "I'll believe that, when I see it!" and turned off the webcam.

Minion gave a speech about how he valued partnership and how Floop was absent; but then Floop spoke out on the intercoms, demanding Minion come to him. Mr. Lisp and Ms Gradenko were confused and Lisp said he thought Floop wasn't there. Minion told him he wasn't but went to check it out.

Mr. Lisp waited impatiently but then Ms Gradenko went to Floop's throne and decided to give it to Lisp; and said he'd be more comfortable there. Mr. Lisp sat down and told her that she'd got his name wrong, and it was Lisp, not Lithp (an intentional joke in the film). Mr. Lisp then said that his Army of Spy Kids was the only comfort he would need, and Minion appeared, saying they are on their way, but Minion now had four heads, having been under Floop's mutation lasers.

The Cortez parents, of whom Mr. Lisp was an old enemy of, gatecrashed, and Gregorio Cortez said he ought to have known Mr. Lisp was the villain. Mr. Lisp ordered that the Cortezes be destroyed. Their henchmen tried to kill them but were knocked out; and then the Cortez children arrived, at the same time as the Spy Kids themselves. Mr. Lisp went mad with glee and power; and was smiling insanely.

But just then Machete, Gregorio's brother, leapt in through the high window and caused havoc. Machete came to his family's rescue and prepared to fight the Spy Kids. Just then Mr. Lisp regained control and bellowed at the robots to "tear them limb from limb" as he wanted the Cortezes killed. Mr. Lisp sat back down on the throne. But then Floop reprogrammed the minds of the Spy Kids to harm Mr. Lisp and his fellow agents instead, and they ran at Mr. Lisp, who disappeared under a mound of robots. Mr. Lisp was then thrown up into the air along with Ms Gradenko and Minion, and he called to Minion to let them down, but Minion said the Spy Kids would no longer listen to him and they were powerless.

Given that Minion undoubtedly survived the attack from the Spy Kids; its possible Ms. Gradenko and Mr. Lisp also survived, and were overcome and imprisoned by Floop and/or handed over to the OSS for crimes against the organisation. Either way, they are still in jail to this day whereas Minion was allowed to go free because he was blackmailed by Lisp and Floop somehow thought Minion deserved a second chance.

Mr. Lisp was a ruthless power-hungry man who wished to become ruler of a dystopian world where children would be subservient and pressed into military combat, regardless of what the public thought of this. Lisp was a terrorist and not above using nuclear or biological weapons if need be; the good example of this was the Spy Kids, robotic androids he desired. Lisp was also utterly scornful, several times he berated Floop's genius, showing no desire to have intellect or creativity in his new regime. He also disregarded human emotions such as love; outright sneering at Ingrid and Gregori's love and dismissing any attempts made by Ms. Gradenko to woo him. Mr. Lisp was also incredibly arrogant, and he rarely lost his cool - he was more like a robot than the robot kids. He only ever lost his cool when the tables were all against him, and even then he just yelled at Minion to control the Spy Kids, showing little to no concern for himself. Its possible he did not care whatsoever what happened to him, only that his goals were successful. He also hated women with a passion, as he left Ms. Gradenko unprotected by having her bodyguards beat up Ingrid and Gregorio, unknowing of their combat prowess, and he ordered Ingrid and her family torn limb from limb. He never showed any warmth to others, not even in friendship, and sneered when Minion displayed partnership values. He also was very rude, outright saying "I thought you said Floop wasn't here?" while tutting impatiently at Minion. He showed no value of partnership as he seemingly forgot about Minion very quickly and when he returned, he was only confused about his deformation, rather than shocked. He was always apparently on top of the scene and he never had failed until he came on Floop. 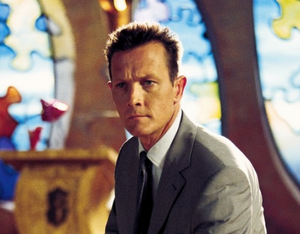 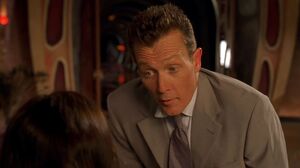 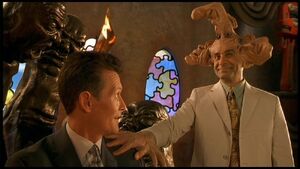