Member of the Toppat Clan

Operator of the Toppat Train

Mr. Macbeth, also known as the Conductor, is a supporting antagonist in Completing the Mission, the sixth and final installment of the Henry Stickmin video-game series. He is a high ranking member of the Toppat Clan and acts as the operator of the Toppat Train.

His most villainous role is in the Little Nest Egg pathway where he serves as the main antagonist. When Henry successfully escapes the other Toppats, he is alerted about it and complains about having to do everything himself before stopping the train. He then confronts Henry with a laser gun and begins a fight with him, clearly parodying Undertale.

If the player decides to spare him, he will rant about Henry not taking him seriously before shooting him with an unavoidable laser beam attack, resulting in a FAIL.

If the player selects the Attack option, Henry will attack him, but only deals one damage. Mr. Macbeth then shoots Henry and kills him, resulting in a FAIL.

If the player bribes him, he declines the offer stating the money isn’t even Henry’s, and shoots him, resulting in a FAIL/

If the player chooses the mirror, Mr. Macbeth will shoot Henry with a laser, but it reflects back at him and reduces him to a pile of ash (like what happens to monsters in Undertale), and Henry wins the battle.

Mr. Macbeth is the secondary antagonist.

When Henry and Ellie shoot the top of the tunnel, it gets covered with rocks. When one of the Toppats tells Mr. Macbeth to stop the train, he looks ahead and sees the rock covered tunnel, gasping in fear and shock. He contacts the Right Hand Man, telling him the train is in trouble and he can’t stop it before crashing the train, presumably killing him and the other Toppats. 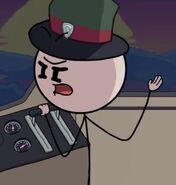 Mr. Macbeth with other Toppats in a escape pot.

Mr. Macbeth's demise with his own laser beam.