Villains Wiki
Register
Don't have an account?
Sign In
Advertisement
in: Greedy, In Love, Wealthy,
and 34 more

He’s an obese brown mole. He wears an Elizabethan-type-clothing, he’s greedy, gluttonous and materialistic, so he has a hatred to the sun, birds and beetles because he obviously kills beetles, stuffs them and pins them to his wall, he lives in a house which is a crown underground with all of his gold, money and jewelry.

He was voiced by the late John Hurt, who also played the Horned King in The Black Cauldron, Caligula in I Claudius, Sailor John in The Legend of the Lost Treasure, Claudandus in Felidae, Jean-Claude in The Hunchback of Notre Dame by Golden Films, Adam Sutler in V For Vendetta, Harry in Pride, Percival Graves in King Ralph, and General Woundwort in the Watership Down TV series.

The Little Jitterbugs start a fire above Frozen Prince to let the ice melt. They notice Mr. Mole's gonna marry Thumbelina, when the ice melts, they will tell Cornelius about it.

On the morning of Mr. Mole's Wedding, Thumbelina approaches sadly to the Mole but thinks about her true love, Fairy Prince Cornelius. But she gets distracted by a Reverend Rat, The priest who asks her that Thumbelina does take Mr. Mole to be her husband, but Thumbelina answers "Never!". She tells him that she cannot marry Mr. Mole and she doesn't love him. The crowd gasps in alarm, Grundel Toad crashes the roof down to the ground, Thumbelina kicks Grundel Toad's leg and runs away, Mr. Mole shouts "After Her!" and brings his guests as an angry mob to go after Thumbelina. The Beetle, Grundel's henchman, hops down to catch Thumbelina, but fails. Soon after, the mob chases Thumbelina across a stone bridge over a sheer drop hundreds of feet down, and Cornelius fights Grundel. After the toad falls, taking the prince with him, Mr. Mole and his mob continue to try to catch Thumbelina, but Thumbelina opens an exit and climbs out of the hole while the jewels and coins tumbles down towards to the Mole and his mobs and they were chased away by the avalanche of money.

In the end, Mr. Mole redeemed himself and married Miss. Fieldmouse during the end credits. 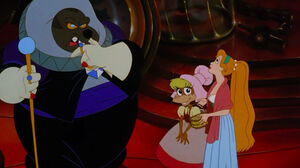 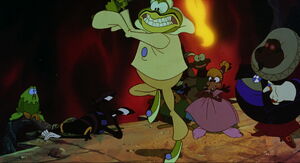 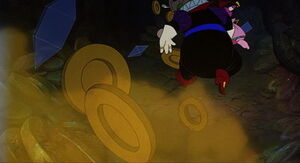