Emissary to the Shadows

To serve the Shadows in their goals at any and all costs.

Mr. Morden, also known as Morden, is mostly a secondary antagonist of the TV series Babylon 5 that works for the Shadows.

He was portrayed by Ed Wasser.

Originally from Earth, Morden was born on Monday, May 25, 2223 in Summit, New Jersey. While studying for his Ph.D. in archaeology at Michigan State University, Morden took his first job as a teenager in the University bookstore. After graduating with a speciality in archaeolinguistics Morden found employment working for Earthforce's New Technologies Division, during which time he visited several worlds and dig sites including Anfran. In June 2248 he married his wife and almost two years later in May 2250 she gave birth to their daughter Sarah Morden. In February of that year Morden gave a speech before the Interplanetary Archaeological Society on the misconceptions surrounding Anfran love stones; one of his earliest research projects as an archaeolinguist.

In May 2256, tragedy struck when his wife and daughter were killed when the ship they were traveling on was caught in the terrorist bombing of the Io jumpgate that claimed over five hundred other passengers. Images of a distressed an grief stricken Morden being harassed by insensitive reporters were broadcast on ISN. Morden later moved to Station Prime.

Morden was still working for Earthforce New Technologies when he was put assigned 'on loan' to IPX for Dr. Chang's archaeological team aboard the Icarus in December of 2256. The Icarus was an Interplanetary Expeditions exploratory ship that set down on Z'ha'dum in 2257, in which the crew came into contact with the newly awakened Shadows. During the flight, he was befriended by Dr. Anna Sheridan who during the ship's new years party, gave him an Anfran love stone, an artifact from one of his previous expeditions which she had taken from his quarters the day before and had put on a necklace. Shocked that he failed to notice it was missing from his quarters, Morden puts it around his neck and decides to keep it with him, always.

What Do You Want?

Morden returned to civilization in 2258 on Babylon 5 with the purpose of asking each of the main races a single question, "What do you want?" Secretly working for the Shadows, they used this question to see whether or not the ambassadors and races fit their needs. Although at first Ambassador G'Kar showed promise, he had no great ambition beyond revenge, however he discovers that Londo Mollari is the perfect candidate for their needs and seizes an opportunity to put Londo in his debt and on the path his "associates" need him to be. With his help he convinces Londo to allow the Shadows to lend their support in the fight against the Narn, allowing them to sweep through to victory without the Centauri losing a single fighter.

What Happened To The Icarus?

When it is discovered who Morden is and where he came from John Sheridan tries to find out detailed information on why he's the lone survivor of the Icarus. Delenn and Kosh explain to Captain Sheridan the truth about what happened, and that the Icarus was not actually destroyed but that when they arrived on Z'ha'dum they had awakened the Shadows who forced the humans to either serve them or be killed.

Evidence is later discovered that Morden had a hand in helping President Clark to assasinate President Santiago.

In 2260 he secretly caused the death of Adira Tyree to convince Londo Mollari to continue to work with the Shadows by causing him to become emotional and vulnerable and placing the blame solely on Lord Refa - his closest ally. He was also present when the Shadows killed Ambassador Kosh. Morden was present when John Sheridan destroyed the Shadow's main capital city. He was nearly killed, and suffered a great amount of damage to his skin, but quickly recovered.

A Shadow of His Former Self

In early 2261 he was assigned to Centauri Prime to serve as the intermediary for the Shadows and Emperor Cartagia as the small island of Selini was being used as a base of operations for Shadow forces. Soon after Cartagia is killed, Londo orders Morden killed to save Centauri Prime from being destroyed by the Vorlons. Morden's head is placed on a pike which Vir Cotto gratefully acknowledges with a small wave. But before his death, he vowed that the Shadows or their allies will make sure that the Centauri will pay the price for Londo's betrayal.

From Beyond the Veil

In 2262, Morden would return during the Day of the Dead ceremony to tell Lennier that Delenn would never love him the way he loves her and that it would make him betray the Rangers and die shortly thereafter. Morden also told Lennier that his head was still stuck on a pike outside the Imperial Palace, that maggots had eaten his flesh and the birds had taken all his hair for their nests.

Wishes Made to Him were Granted

All the characters who answered the Shadow Question got exactly what they asked for, although Vir was the only one who was satisfied with the results.

His Final Threats Were Made Good by Shadow Allies

When Londo had him killed for the safety of his homeworld and avenging the death of his lover, Adira Tyree, he promised that he and Centauri Prime would pay the price for his betrayal. Almost a year later after the Shadows and the rest of First Ones left the galaxy, the servants of The Shadows, the Drakh would secretly take over Centauri Prime and even have them cut-off from the rest of the Interstellar Alliance when they framed the Centauri of attacking Alliance members. The retaliation from the Alliance as well as the Centauri Republic forced to pay restitutions to the worlds that were attacked by Centauri warships that were controlled by the Drakh reduced them to a third rate galactic power who stood alone due to the fact that they left the alliance after. Mr. Morden would indeed posthumously get his revenge.

On the Day of the Dead alien holiday which the dead would for one night visit the living and give answers to life's questions, Mr. Morden would appear to Lennier. He told Lennier that he would betray the Rangers out of jealousy he felt towards John Sheridan for he had something he wanted and could never get, Delenn's love. Lennier dismissed this as lies since this was coming from Morden himself who was a known liar when he was alive.

Months later just after Sheridan and Delenn left for Mimbar to set up the new capitol city for the Alliance, there was an accident and Sheridan was helping an injured worker on the ship. He was trapped with the worker as poisonous gas filled the room. Lennier was there and he was about to help Sheridan, but he was overcome with jealousy that he tried to abandoned him, but his good nature told him he could not do it so he went back, but then he saw Sheridan was saved. Delenn asked him what happened, but he just left the ship in a fighter and left the Rangers and imposed a self-exile from his homeworld. Even though he redeemed himself when he died in the Telepath War, Mr. Morden's prophecy was still fulfilled. 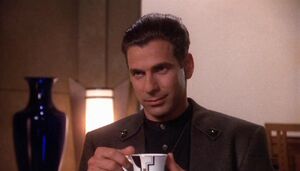 Mr. Morden sipping tea while in a meeting with John Sheridan and a few others on Z'ha'dum. 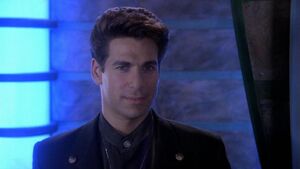 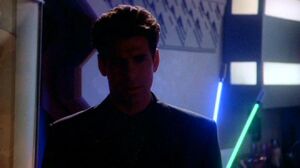 Mr. Morden lurking in the dark.
Add a photo to this gallery

Retrieved from "https://villains.fandom.com/wiki/Mr._Morden?oldid=3780221"
Community content is available under CC-BY-SA unless otherwise noted.