Superhuman hearing (only in the oldest versions of the game)

Make sure that no one enters his basement (failed).

Theodore Masters Peterson, better known as The Neighbor or Mr. Peterson, is the titular main antagonist of the Hello Neighbor franchise.

He is the cranky and possibly insane neighbor and arch-nemesis of the main protagonist, Nicky Roth. He was once a very friendly family man; however, due to two incidents, Mr. Peterson became a hostile man who attacks anyone who even just steps on his lawn.

Mr. Peterson was once an amusement park designer and a very friendly family man who lived with his unnamed wife and his children, Mya and Aaron Peterson. He once let a younger Nicky see and befriend his son. However, due to a horrible car accident, his wife had to be hospitalized. Mr. Peterson became anxious, waiting in the hospital until his wife eventually died in there. Not long after, Aaron accidentally pushed Mya off the roof of Mr. Peterson's house, leading to her death. With the losses of his beloved wife and daughter in just a short period of time, these two incidents severely crippled Mr. Peterson's sanity.

Mr. Peterson plays a minor role in this game as the game focuses more on his two children, Mya and Aaron. Mr. Peterson is seen at the dinner table along with his wife and two children. Mr. Peterson is seen again entering the house with his wives purse, he then lets it go before collapsing to his knees. Mya and Aaron hug their father to comfort him; however, this wasn't enough as Mr. Peterson became more sluggish, watching TV and appearing not to notice his daughter's concerned look for him even though she was right in front of him. He appears again to get the children for dinner, motioning his hand tiredly. At dinner, Aaron takes Mya's spoon before pushing her and causing her plate to fall and break. Seeing this, Mr. Peterson gets up and sends Aaron to his room, but before he leaves he takes Mya's doll. Mya goes to get it back but Mr. Peterson motions his hand to tell her to stay and eat dinner. Mr. Peterson is seen one final time during the credits, digging a grave, most likely for Mya.

In his house, Mr. Peterson locks Aaron in his basement, possibly to either punish him for Mya's death or to protect him from meeting his wife and daughter's fate. Nicky witnesses this. Mr. Peterson then finds out that Nicky is watching him and throws him onto the other side of the road as he goes to lock the basement door and hide the basement key. Nicky has to outsmart and evade Mr. Peterson and eventually finds the key to the basement, and after solving some puzzles, reaches a corridor. However, Mr. Peterson comes in behind him when the corridor is reached. Nicky tries to escape but the door at the end of the corridor is locked with three padlocks, the keys to which are unavailable, allowing Mr. Peterson to catch Nicky and end the Act.

In Hello Neighbor: Secret Neighbor, Mr. Peterson has successfully captured Nicky and has locked him in his basement, so six kids and friends of Nicky (known as the Rescue Squad) decide to rescue him and Aaron. Like Nicky, the Rescue Squad must outsmart and evade Mr. Peterson to help Nicky escape as Mr. Peterson doesn't intend to let him go and now wishes to imprison the intruders who dared to invade his property. Mr. Peterson will disguise himself as a child to pick off the children one by one unless the kids manage to find out which one of them is Mr. Peterson. However Mr. Peterson in this game is not truly Mr. Peterson, and is actually the Shadow Man in disguise. It is not known why this is the case.

The opening cutscene reveals that Mr. Peterson has kidnapped Nicky and has been possibly torturing him. Trapped in a room in the basement, Nicky sits for a few seconds before Aaron comes by and unlocks the door. Once leaving the room, Nicky can easily climb out of the basement using a ladder. He has to once again outsmart and evade Mr. Peterson, this time to escape his house, now with some additions, notably two new floors and a massive fence around the entire property. Using a key, a trampoline, or a crowbar, he can break out in three different ways. Once Nicky finally escapes, Mr. Peterson comes out to chase him, but hears a window breaking implied to be Aaron escaping. He instead closes the wooden gate while threateningly staring at Nicky, as Nicky is already outside the fence but Aaron can still be easily stopped. The Act ends when Mr. Peterson completely shuts the gate, and the screen cuts to black.

In this Act, it is revealed that Nicky still has nightmares about Mr. Peterson after that day. Nicky has another nightmare about Mr. Peterson after moving into his old house in the neighborhood, where Mr. Peterson's house is shown to have been burned down years after Act 2. In this nightmare, Mr. Peterson has kidnapped his son Aaron and has locked him in his basement in his amusement park-like house. Nicky once more has to outsmart and evade Mr. Peterson to unlock the basement door, but before he can enter, Nicky must overcome his three fears from his childhood or the door at the end of the corridor will still be locked. Once Nicky has overcome his fears, he is about to enter the same corridor where he was caught by Mr. Peterson. Mr. Peterson catches Nicky, but Nicky uses his new powers from overcoming his fears and breaks free of Mr. Peterson's grasp, enters the corridor and locks the door. If Nicky has overcome all his fears then the door at the end of the corridor will be unlocked, once Nicky enters he will be in a one-room house with a cardboard cut-out of Aaron. However, a giant Mr. Peterson appears out of nowhere and destroys the house. Nicky must then climb and use the umbrellas to get on the house on the giant Mr. Peterson's back. Once Nicky enters the house door, he must overcome his final fear, a giant version of the Shadow Man. Once done, he'll be transported into another white void with an Exit Door and a house. If Nicky peers into the house's window, he can see the real Mr. Peterson, who has locked himself in a room. On the other side of the barricaded door is the Shadow Man, now trapped in the room. Unlike Nicky, Mr. Peterson cannot seem to overcome his guilt or fear and thus cannot overcome and defeat the Shadow Man like Nicky did. Unable to help Mr. Peterson, Nicky leaves through the exit door and wakes up from his nightmare. However, this version of Mr. Peterson may not actually be the real one, and merely a fake version in Nicky's nightmare, as evident by his part in Hello Neighbor 2.

Mr. Peterson goes missing, the town has loops and reset days. But he is not really missing.. The Guest appears and kidnaps people. He then reveals to Piper Klein that he is Mr. Peterson.

It's revealed that, in an unknown time period, Peterson comes back, albeit in a new costume as The Guest, and locks his attic up. As a direct sequel, this shows that Mr. Peterson survived the fire that demolished his house.

NOTE: This is non-canon to both the Hello Neighbor and Bendy franchises.

On Halloween, the series made a crossover with the Bendy and the Ink Machine franchise. In this Hello Bendy DLC, Peterson replaces Ink Bendy and Sammy Lawrence. The music is also replaced by Peterson's Chase Theme.

Mr. Peterson is shown to be rather cranky and loves his privacy, attacking Nicky if he just steps on his lawn. He is also very protective of his basement, locking it up with a key and doing his best to hide the key from Nicky. Once Nicky goes too far into the basement, Mr. Peterson decides that Nicky knows too much and kidnaps him instead of kicking him out. It seems he is also not above torturing children, as Nicky seems battered and beaten at the beginning of Act 2, and even threateningly stares at Nicky before closing the gate. 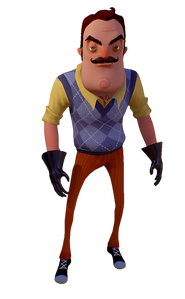 The Shadow Man in the form of Mr. Peterson. 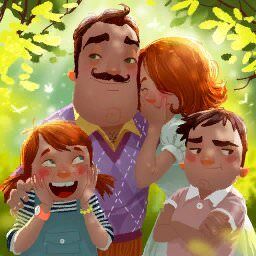 A picture of Mr. Peterson and his family. 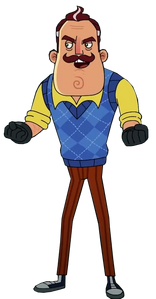 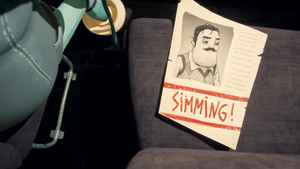 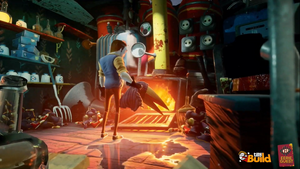 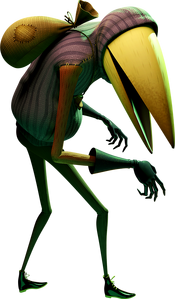 Mr. Peterson as The Guest. 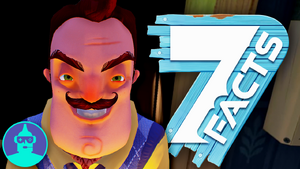 7 HELLO Neighbor Facts YOU Should Know!!! The Leaderboard 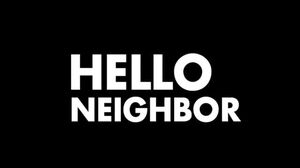 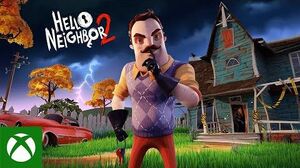