Kill everyone around him who hangs out with Lammy (succeeded).

Mr. Pickles is one of the main characters of Happy Tree Friends. He is Lammy's debatably imaginary (villainous) friend, and they are never seen separated. He is a pickle and the only non-animal main character in the show. Like Lammy, he does not appear in the TV series, as he debuted in 2010, whereas the TV series aired (and ended) in 2006.

Mr. Pickles is a green French pickle who wears a top hat and has a mustache.

Although he is similar to Flippy, the difference is that Mr. Pickles presents a new opportunity for the show to set up unique scenarios where one character is blamed for another's actions, leading to some awkward results.

If he is real, Mr. Pickles could also be jealous of other people around Lammy and afraid of being replaced by them, thus he tries to kill them, since he would want all of her attention to himself rather than let her have real friends. After he kills someone, he goes back to his normal pickle form, which gets Lammy framed.

He is also an antagonist of the series, murdering people (such as Petunia and Flaky) regularly and on purpose. He is one of the most violent characters in the series along with Fliqpy and The Ants.

For now, Mr. Pickles is the only non-animal character in the show. It is possible that more of his kind may appear in the future, especially considering Lammy's possible schizophrenia. If Mr. Pickles is a living creature, he and Lammy seem to have a relationship similar to that of Lifty and Shifty in that they are usually shown to be very close and never seen without each other, but Mr. Pickles always frames Lammy for his murders (or at least never reveals himself when she's blamed) and Lammy never even hesitates to throw the blame on him. This shows that despite their love for each other, when it comes down to it, they both care more about themselves than each other. 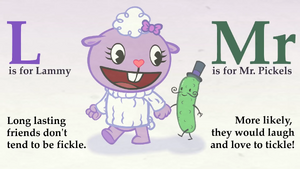 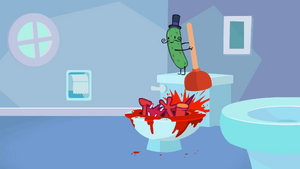 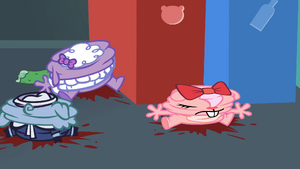 Retrieved from "https://villains.fandom.com/wiki/Mr._Pickles_(Happy_Tree_Friends)?oldid=4364704"
Community content is available under CC-BY-SA unless otherwise noted.