Find out who the undercover cop is.

Don't tell anyone his real name.
Keep the location of the diamonds hidden. (all succeeded)
Get away with his crimes. (failed)

Mr. Pink is the tritagonist of the 1992 film Reservoir Dogs. Unlike most of his accomplices, he is more level-headed and doesn't choose violence as a primary option. Like the majority of the other robbers, his real name is never revealed.

He was portrayed by Steve Buscemi, who also portrayed Carl Showalter in Fargo, Nucky Thompson in Boardwalk Empire, Garland Greene in Con Air, Mr. Wesley in Home on the Range, Francis E. Francis in The Boss Baby, Dwight Diddlehopper in The Simpsons, Tony Blundetto in The Sopranos, and Randall Boggs in Monsters Inc. and Monsters University.

After his accomplice Mr. Blonde went on a shooting spree, Pink found a hole in the police barricade and "shot his way out." He ran with a satchel full of diamonds with three police officers tailing him close behind. Eventually, he is struck by a car and he proceeded to carjack it, making his escape. He revealed in the film that he considered just driving away instead of going to the rendezvous point. By the end of the film, his partners Nice Guy Eddie and Joe are killed for trying to kill Mr. Orange whose a cop, and Mr. Pink runs out with the jewels.

However, if the viewer listens closely, they can hear a faint scream after Mr. Pink runs out, which Quentin Tarantino has since confirmed was the sound of Mr. Pink yelling at the cops who shot and arrested him.

Mr. Pink features as a playable character in the 2006 video game adaption for Reservoir Dogs. His missions depict him escaping from the robbery and back to the warehouse, and then retrieving the diamonds that he had stashed. The way the player plays the game determines Mr. Pink's final fate at the end of the game. If they act "professional" (not killing everything in sight and being more strategic), Mr. Pink will escape after the Mexican stand-off, but lose the diamonds in the process. If the player gets a "career criminal rank", Mr. Pink will be arrested, and if they get the "psycho" rank, Mr. Pink will be gunned down by police when attempting to shoot his way out.

His "signature move" in the game (a method used to make all police surrender) is hitting the hostage repeatedly.

Mr. Pink makes an appearance in the game Payday 2. He appears in the Reservoir Dogs Heist, where he was shown to be with the Payday Gang, as shown in Day 1 of the heist (Garnet Group Boutique), him, Mr. Brown, Mr. Blonde and the gang were in a store of the same name to meet Cabot's men. His screen time in Day 1 is short only shown in the first parts of the heist, since after Brown was shot dead, he runs elsewhere to before the LAPD raid begins. He would later appear in Day 2 after you defended the warehouse, where he would be shown injured and bleeding after the car crashes, the gang escorts him to the safety in the warehouse. 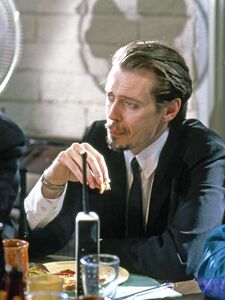 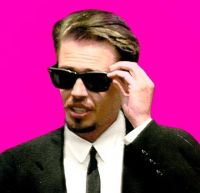 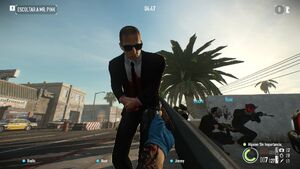 Mr. Pink as he appears in Payday 2. 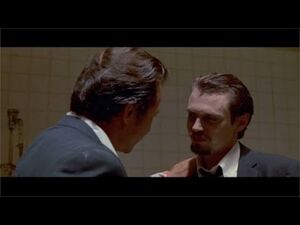