Member of the Little Misters

Kill all other Little Misters. (ongoing, succeeded and failed in tales)

Kill his creator. (ongoing)
Cause as much pain and destruction as possible. (succeeded thus far)
Release the Scarlet King (failed)

Mr. Redd is a recurring antagonist in the universe of the SCP Foundation. He is one of the many Little Misters created by Dr. Wondertainment with the intent of being a friend to the children before he was corrupted by the Scarlet King into a merciless psychopath and is currently uncontained by the Foundation. Mr. Redd plays a role in the "Tales of Mr. Collector" and the "Cool War" series and "What a Wonderful World" canon.

Mr. Redd was originally one of the Little Misters created by either Cornelius Młynarczyk, Reginald Westinghouse or Bertrand Wondertainment, the presidents of Dr. Wondertainment, by infusing a human-like artificial husk with the soul of a recently deceased child which had been provided by child serial killer Brainy Brian. Redd was created with the intent of being a joyful friend who would play with various children and make them happy. However, as Redd remained being uncollected by the Wondertainment's customers due to his theme being rage he felt his own rage growing as he realized he was simply a product created for the entertainment of others, and in his rage he came into contact with the Scarlet King. This caused Redd to become corrupted by the evil god, which led to him becoming hellbent in destroying everything in his path and completely disregarding his humanity. This later led to Dr. Wondertainment discontinuing Mr. Redd and locking him in his own apartment.

After Dr. Wondertainment finished creating the rest of the Little Misters he had each of them assigned to some children so they could teach them various lessons regarding their themes, with Mr. Redd being assigned to the brothers Ruiz and Pico Wilson with the intent of teaching them how to handle anger issues. However, because of his mental state Redd instead kidnapped the poor brothers, taking them to a secluded place while murdering their parents and hiding their bodies. He then proceeded to psychologically and physically torture the brothers, with the twisted intent of teaching them a lesson and saying that he was their new family. Ruiz was able to retain some of his sanity and refused to listen to Redd, but Pico being younger listened to every word Redd said, twisting the child's mind and slowly turning him into a murderous psychopath just like Redd. Redd would later use them as hostages in order to make a demand to Dr. Wondertainment to meet his creator, but the company straight up refused to comply, leaving the brothers at the mercy of Redd. After Ruiz tried to dig up the supposed graves of his parents, he and Pico were finally able to escape Redd's hellish torment. This experience would later lead to an adult Ruiz to try take revenge on Dr. Wondertainment for creating Redd and destroying his little brother's life.

After years had passed, a letter was sent to Redd from the Wonderworks which welcomed him back to the place he was created. So he began walking back to the Wonderworks for forty days without any sustenance, while his shoes were completely torn away from his feet causing him to start bleeding. Eventually he finally arrived at the Wonderworks and after hopping over the barbed wires made his way to the inside the toy shop. He was guided to the current owner's office by a corgi named Jeremy. There he met for the first time Isabel Wondertainment who had replaced her father, Redd's creator, and realized that his "father" had died, causing him to scream in desperation before laughing maniacally. Then Isabel's assistant Emma Aislethorp-Brown got between him and Isabel in order to keep Redd from harming her, but Redd decided to leave as he had only been angry with his father and since he was now dead Redd was now somewhat at peace.

At some point in time, a being known as Rip Van Winkle, the evil governor of Zamadenbora existing in the Oneiroi space, came to Redd through the latter's dream and showed him the life within Zamadenbora. Winkle showed Redd how dreamers at the verge of death would go to Zamadenbora in order to evade death only for them to be forever trapped inside, causing countless dreamers to go mad and attempt to escape. Winkle then revealed to Redd that Zamadenbora was created as a result of the thoughts and dreams of simple plants and animals, meaning that the dreams of sentient people can be even more powerful, before urging Redd to use his dreams to create something more powerful and possibly horrible within the Oneiroi world.

In his quest of going after the other Misters, Redd allied himself with the SCP Foundation in order to have some assistance. With their help he was able to capture all of the Misters, such as Mr. Fish, Mr. Stripes and lastly Ms. Sweetie. After their capture, Redd attempted to leave the Foundation site he was currently in, but the personnel refused to let him go as he just like his fellow Misters was an anomaly that needed to be contained. Redd had figured that the Foundation wouldn't let him free so he was ready to use his knife to kill them all, but to his surprise one personnel was faster than him and successfully incapacitated him, leaving Redd to be imprisoned by the Foundation alongside the other Little Misters.

Eventually, Redd decided to confront his creator and kill him for good. After capturing both Mr. Scary and Mr. Lost Redd made his way to the Foundation site that held both Mr. Collector, also known as O5-4, and SCP-231-7. He managed to break inside the site despite being locked down and entered the chamber that held SCP-231-7 where he told her that he would finally free her from the torment before demanding to O5-4 through video surveillance to meet him in the chamber. O5-4 did as he was asked and confronted Redd who told him of his own experience and proceeded to give his creator a paper that gave him the possession of Redd. This caused O5-4 to transform into his Mr. Collector persona and began taunting Redd by saying that Redd's creation and personality was a surprising disaster. This deeply angered Redd and immediately tried kill Mr. Collector with his multiple daggers, but was unable to even harm him due to the latter's powers, and at which point Redd decided to finally unleash the King's Seventh Son. He proceeded to cut SCP-231-7's belly with another dagger and soon the Seventh Son emerged causing mass destruction to occur around the site. Thankfully, Mr. Collector was able to conceal the newborn child within his magic bubble, preventing the Scarlet King from entering reality, which caused Redd to be overwhelmed with desperation. However, this also caused Redd to regain his humanity once again and be freed from the Scarlet King's influence, and being forgiven by his creator Redd rechristened himself as Mr. Bluee and was subsequently contained alongside his fellow Misters.

The Real Adventures in Capitalism

Mr. Redd was finally able to murder his creator and most of the Little Misters, save for Mr. Hungry. After that, they were confronted by a crying Isabel Wondertainment and her assistant Emma. Redd also tried to kill her, but Isabel proved to be faster than him and despite his efforts he was overpowered and left defeated by her which allowed Mr. Hungry to consume Redd, killing him for good.

As the Dr. Wondertainment company was failing, Mr. Collector deemed Redd alongside the other Misters as defective and a failure, and so he became forced to put all of them down.

Thanks to his nature as a Little Mister, Redd was biologically immortal. After being corrupted by the Scarlet King Redd gained additional powers such speed, reflexes, summoning shadow blades, and the ability to enter heavily fortified structures and wielding various daggers and swords. He also appeared to wield some dark magic as when he spilled his own blood on his body, ritualistic symbols appeared all over his body, similar to the symbols within The Factory.

Mr. Redd was described as looking like a pale man with fiery red hair and wearing a black and red jacket or scarlet coat and polished black shoes. He stood much taller than Isabel Wondertainment and in SCP-3301, Redd's voice was described as aggressive.

Originally, despite embodying the rage of his creator, Mr. Redd was apparently a kind and lovable individual who loved his fellow Little Misters and enjoyed entertaining children, as shown while performing music for a group of children he promised to Mr. Brass that he would free him from Foundation custody. However, after being somewhat abandoned and ignored by his creator and the kids, Redd became filled with so much rage that he came into contact with the Scarlet King who further corrupted the Little Mister. This led to Redd losing all of his humanity and becoming a psychotic murderer with no qualms in destroying other's lives, which even included innocent children. He became determined to destroy everything in his path and eventually kill his fellow Misters and his creator whom he thought as not caring much about his creations and was just a selfish individual. Redd also seemed to enjoy the pain being inflicted to him as when he injured his feet and hands while making his way to the Wonderworks he simply smiled and rubbed himself with his blood.

There are tales in which Redd returns to his former self and is somewhat forgiven for his actions, redeeming himself and become a good man once again. 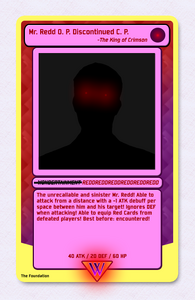 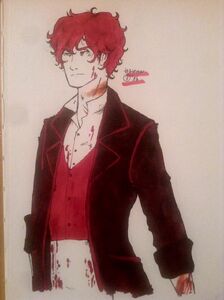 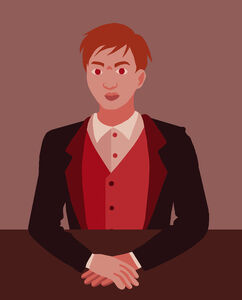 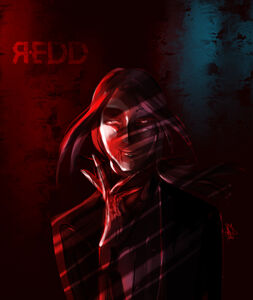 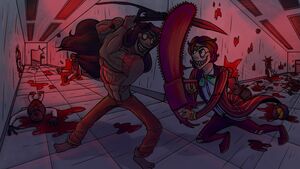 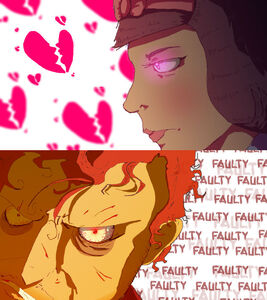 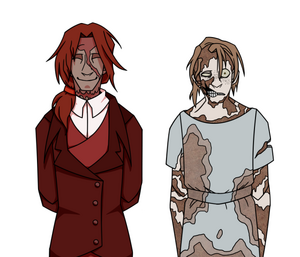 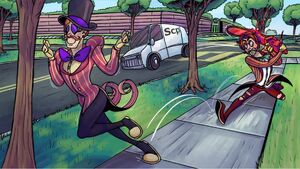 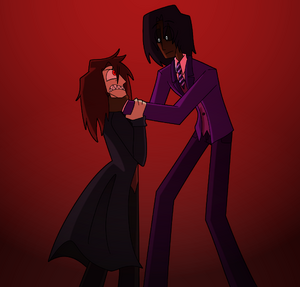 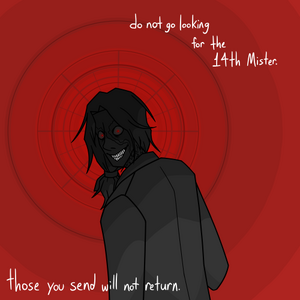 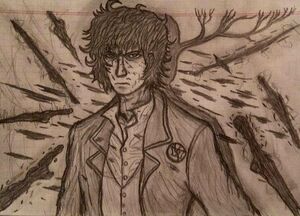 Mr. Redd with the Scarlet King. 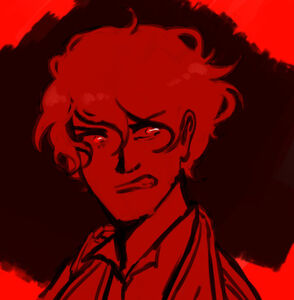 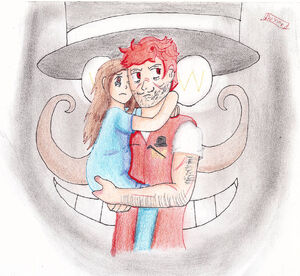 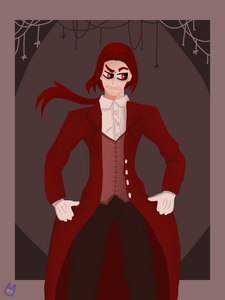 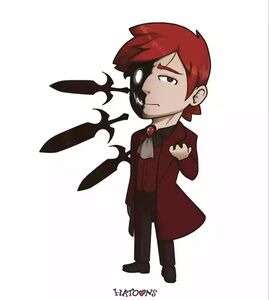 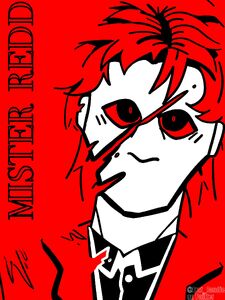 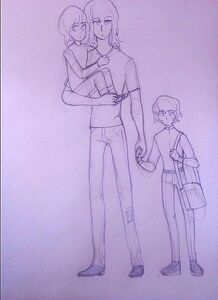 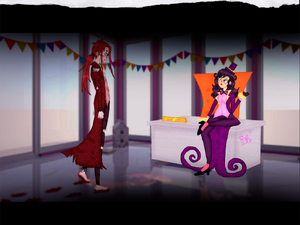