Mr. Fred McFeely Rogers is a semi-recurring villain from the FOX animated sit-com, Family Guy. He is a portrayal of the real world celebrity, Fred Rogers of Mr. Rogers Neighborhood. He has made a number of appearances in the show, where one-off gags portray him as a villain.

He is voiced by Wally Wingert.

In "Brian in Love", Mr. Rogers was shown on his TV show, welcoming the viewers into his neighborhood. Fred hears the noise of the trolley coming in only to find Stewie riding it in and holding a laser gun. Stewie revealed the Mr. Rogers that he destroyed The Neighborhood of Make Believe and was now going to kill him. Mr. Rogers freaked out and begged for mercy only for Stewie to kill him completely.

Stewie woke up and found out that the past events were all just a dream. Lois comes into his room and tells Stewie that he was just talking in his sleep. Just then, she talks in Mr. Rogers' voice and tells Stewie that it's time now for him to meet Mr. Death as she takes her face off and turns out to actually be Mr. Rogers going in disguise as her and goes in for the kill.

In "Running Mates", Mr. Rogers was shown spying on his female neighbor and watching her undress. 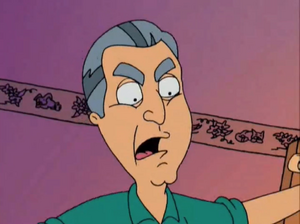 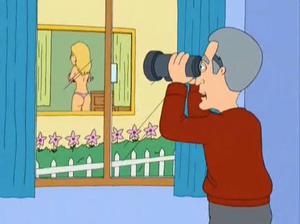 Mr. Rogers spying on his neighbor.