Leader of the clown group

Escape from the police (succeeded).

Mr. Rompers is an antagonist in the seventh season of Archer. He is a psychotic criminal and leader of a group of clown robbers who arrive at Ellis Crane's mansion to steal a valuable necklace called the Tsarina from Veronica Deane. He is the main antagonist of the two-parted episode, "Bel Panto".

He was voiced by Randy Havens.

Most of his life and name remain unknown, but he was one of Shapiro's old clients.

As Lana witnessed Archer kissing Veronica Deane to make her jealous, Rompers and his gang appear and attack everyone. He stands on a table and introduces himself and his group to the guests as their "host". He tells the hostages that every phone line has been cut, every exit is booby-trapped and has Oingo the orange and Boingo the blue clown commandeered everyone's cellphone. As Lord Feltchley warns the others to do what the clowns say, Rompers thanks him and asks if he's finished, resulting in the lord getting kicked in the face unconsciously and brutally hits Shaprio in the face.

He then orders Giggles the green clown, Yum Yum the yellow clown and Pinky Brewster the pink clown to tear down the mansion room by room to find Veronica Deane. As they still searched for Veronica, Rompers released most of the guests as they having bathroom issues, leaving only the former ISIS members, Shapiro, Crane, and the music players as the remaining hostages. He overhears Pam, Shapiro, and Cheryl talking and tells them to shut up as he becomes furious at the situation.

As the phone starts to ring and continues to do so, Boingo, the blue clown, asks Rompers if he should answer, but Rompers shoots the phone and says no. His goons returned to inform him they haven't found the necklace, which angers Rompers. As he furiously yells his plan is in "shambles", Shapiro suggests they should surrounder to the cops as they haven't hurt anybody yet, but Rompers has Oingo and Boingo to take and torture Shapiro to find out where was Veronica Deane was. Yum Yum, Nurple, and Giggles returns and inform Rompers that they haven't her yet. As Rompers threatens the guests, Crane asks him if he could go to the bathroom, but recalls that he went earlier ago, Cyril claims that was 4 hours ago which he was right, causing Rompers to angrily rant and has Giggles and Nurple to take the hostages to the bathrooms.

The detectives called Rompers, who threatens to kill a hostage every time the phone ring and throw their corpse off the roof on live television. After brutally beating Shapiro, Oingo and Boingo inform Rompers that he does not know the whereabouts of Veronica Deane, which he believes. He then asks if emeralds melt and angrily threatens to burn down the mansion to Shapiro.

While thinking Giggles was Archer, Malory tells him that Lana needs to use the bathroom again, Causing Rompers to questions her, Malory cuts off Lana and tells them she has diarrhea, ordering Giggles to take to the restroom again.

After the clowns couldn't find Pinky Brewster, Yum Yum, and Giggles or the necklace, they go with plan X, disguising themselves as the hostages and successfully escaped. Later, Archer confronts Shapiro about him hiring the clowns to steal the tsarina, but tricked him to reveal he was the one responsible for the robbery.

Mr. Rompers appears to be insane and have a short temper, but can be humorous at times. His mood swings are hinted at him being mentally unstable, even when Alan Shapiro questioning him if he is crazy, which Rompers brutally pistol-whipping Alan and saying "I dunno, maybe." He has shown to be the most competent member of the group, as for the rest of the clowns have shown to be immature and let their guard down. 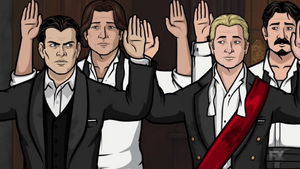 Rompers and the other clowns disguising as hostages and escaping.