Use the Timenado to erase all of time.


Blow up the Earth.
Get revenge on Rigby for ruining his volleyball state championship game tournament (all failed).

He was voiced by Jason Mantzoukas who also played Steelbeak in Ducktales 2017 and Scarecrow in The LEGO Batman Movie.

Mr. Ross was a former volleyball coach teacher and a science teacher of West Anderson High School. After his volleyball game tournament was ruined by Rigby when he played his saxophone, he plans to get revenge on Rigby by using a Timenado to erase all of time in space and blow up the Earth.

When Mordecai and Rigby were still in West Anderson High School, Ross was employed as both a volley ball coach and a science teacher. During a championship volley ball match with rival school Riverdale, Rigby interrupted the game by playing his saxophone, this moment's hesitation causes Riverdale and to hit the ball and win, causing West Anderson High to lose, much to Ross' anger. At the near end of school Rigby is told by Ross that since he's failing his class he won't finish highschool or attend College U like he and Mordecai planned, Rigby begs for a second chance and Ross reluctantly agrees and would pass Rigby if he hands in a school project. Rigby asks if he can get an example on what to do, Ross shows both Rigby and Mordecai his still in progress prototype time machine, he admits he wants to use this to make sure Riverdale does not score that final point and also to get revenge (on Rigby).

Even with this extra help Rigby receives his form in the mail and sees he didn't get that scholarship to College U, he goes to Mordecai's house before he gets there and sees whether or not he made it to College U. Rigby finds Mordecai's form and sees he did make it to College U. Not wanting their friendship to end, Rigby forges a letter saying Mordecai didn't get in. When Mordecai sees Rigby's letter, he immediately decides to use Ross' prototype time machine in order to go to the past and tell himself to get better grades (Rigby also wants to use this to get better grades since he's the one who didn't make it), During their attempt to finish the time machine Mordecai and Rigby accidentally cause an explosion blowing up the science lab and a part of the school and inadvertently causing the Timenado. Because the explosion was caused by Ross' machine and plutonium Ross is fired and sent to jail while Mordecai and Rigby get expelled with Mordecai losing his scholarship.

At some point in time, Ross resurfaces and finds a way to harness the Timenado and plans destroy all of time. Benson, Rigby, Pops, Skips, Muscle Man and High Five Ghost become part of a group called the "Park Rangers" in order to stop Ross from interfering with what's left of time, but to no avail. At some point, Mordecai joins Ross after finding out that Rigby changed his scholarship letter, destroying his future and joins Ross' criminal empire. Benson's squad group manage to reach Ross' base of operations, The Timenado and attempt to destroy it, but they are ambushed by Ross' men, killing Muscle Man, Skips, High Five Ghost and Pops in the process.

Rigby and Benson survive the first attack and Ross comes to gloat and tells the two Mordecai and Rigby actually created the Timenado. Benson and Rigby don't believe Ross at first, but Mordecai tells him that it relates to what happened at high school. Benson tells Rigby to go back into the past and stop whatever caused the Timenado and Benson blocks Ross' men to by Rigby some time killing him in the process. Rigby manages to set the time jump in his ship, but Mordecai shoots him in the chest before he can make the jump.

Because Rigby is shot, he does not have enough time to stop the events that caused the Timenado so he goes into the present timeline to warn the groundskeepers at the park. Rigby tells the others about what's happening and that they need to stop it. Initially it seems that the members of the group managed to stop the Timenado by smashing the time machine prototype before it's finished, but Ross watches the group from afar and makes another prototype in his former classroom. Before the Park members leave Rigby sees that a portal has formed and realizes that his younger selves are still on a plot course to complete the time machine because he still switches Mordecai's letter.

When the park members go back to the High-school to stop the younger Mordecai and Rigby, but Ross and Future Mordecai are waiting for him. Ross and Future Mordecai fight against the present park rangers and distract them long enough for Young Mordecai and Rigby to create the Timenado. After the Timenado is created, Ross makes Rigby to admit what happened with the College U scholarships, threatening to kill Mordecai if not. Rigby decides to read his letter to prove he was in fact the one not to get into College U, showing Future Mordecai why Rigby compromised his future, because he wouldn't be in it with him. Now that Ross finally has gotten his revenge he decides to shoot Mordecai anyway, thankfully Future Mordecai blocks the shot saving him. Mordecai is still angry at Rigby for betraying him and no longer believes they are friends causing him to runaway in sadness with the time machine.

Mordecai and the present park rangers join with Gene for a final showdown with Ross. The present park rangers manage to break into the Timenado once again (chronologically the first time). Rigby returns wanting to say sorry for what he did to Mordecai. Rigby and Mordecai fight against Ross and he falls, the two think he's gone for good since he broke his neck in the fall. Rigby uses the chance to apologize for what he's done and Mordecai forgives him since he's made a couple mistakes on his own without Rigby's expertise, to prove his trust to Mordecai, Rigby chooses to pick up the plutonium in order to destroy the Timenado even though he does not have a protective suit. Mordecai helps Rigby with the plutonium to prove their friendship and carry the plutonium together. Ross comes back to life healing from his neck injury. Ross confronts the duo preparing to fight them once more. Rigby is handed a sword by his ally, Techmo. Rigby slices Ross' head so even if he heals he won't be able to reattach to his body ending him.

Rigby and Mordecai destroy the Timenado and made sure their past selves don't make the same mistake by convincing them to apologize to Mr Ross’ past self for ruining his volleyball game. This is enough for him to not become a revenge seeker. Even though he is still going to jail, he has no ill intentions towards Rigby anymore.

He appears in "Rigby's Graduation Day Special", where he is shown to be in the same prison cell with Doug.

Mr. Ross wears a neck collar that rewinds to revive himself, an armor vest and pants, knee pads, boots, metal gloves, a jacket, and has crazy hair. He looks muscular and has a chest tattoo saying "Time is on my Side".

In the past, he looks slightly muscular. He wore a black and red colored shirt, a red summer hat, black shades, red shorts, and red sneakers. And in Science, he wears reading glasses.

Ever since he lost the volleyball game because of Rigby's distraction, he became obsessed with having revenge on him by inventing a time machine to travel back in time to prevent his volleyball team's lost. However, when Rigby and Mordecai finished his time machine, due to Rigby's failure in school, he was sent to jail for the plutonium smuggling and the destruction of the science lab.

Years later, he made Mordecai turn on the Rigby to help him defeat the park rangers. However, as soon as the timenado was created, he was a traitorous individual who betrayed Mordecai by threatening to kill his present self, showing that he never cared about his failure to go to college.

After his defeat, Mordecai and Rigby told their past selves to apologize to the past Mr. Ross, which made him a really happy man. 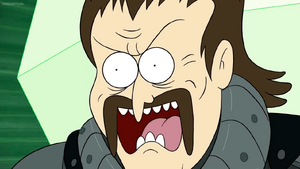 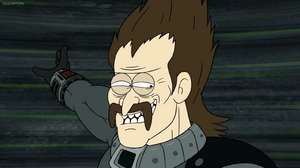 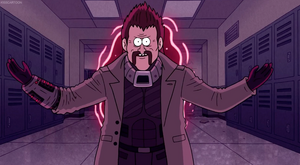 Mr. Ross going back to his portal. 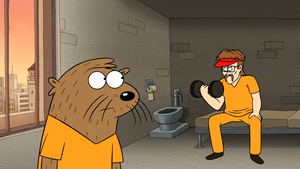 Mr. Ross with Doug in prison. 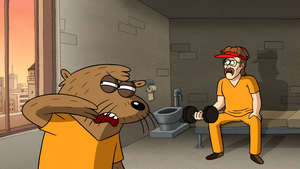 Mr. Ross and Doug seeing a flash of light, which is in fact the separation of the Park in space before the advent of Season 8 (the final season of Regular Show). 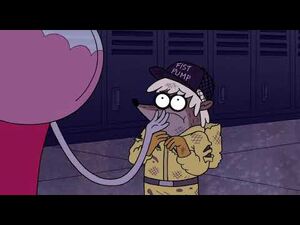