Boxing and putting his opponents to sleep.

Mr. Sandman is the main antagonist of the Punch-Out!! franchise. He makes his first appearance in the original arcade version of the first game. He's the WVBA World Champion, Little Mac's arch-nemesis and also often one of the strongest, if not the strongest opponent in the game.

Mr. Sandman first appeared in the arcade version of Punch-Out!! as the WVBA World Champion, and while he fights similarly to the other other boxers in the game, Mr. Sandman is far stronger and agile, on top of being more accurate. Little Mac also can't fake him out and get a punch in, and merely gets stronger after being knocked down. Here, he wears yellow gloves, white shorts with yellow stripes, and yellow shoes.

Mr. Sandman returns in Mike Tyson's Punch Out!!, although no longer the champion of the World Circuit, as Super Macho Man surpassed him. Here, Mr. Sandman as the ability to guard himself when stunned, and both continues his behaviour when punching and has a new signature move, being his famous "Dreamland Express", a hard-hitting special attack where he does three uppercuts in a row. (The telltale signs of it happening are: He will stop attacking, will block all of Little Mac's jabs, and will briefly flash before the attack.) Mr. Sandman is also one of the few characters in the game that can avoid one of Little Mac's star punches, the only character to dodge these when stunned, and is impossible to have his face attacked when stunned. Here, he wears yellow gloves, grey pants, and black shoes. He also uses the same body template as Bald Bull.

Mr. Sandman once again returns in Super Punch-Out!!, although heavily toned down to where he's the Champion of the Major League. Although nerfed, he still can guard himself while he's stunned, and he is still regarded as being quite difficult compared to the previous opponents. After Mr. Sandman is knocked down twice, the message "Give him full power now, champ!" is yelled by his cornerman, increasing Mr. Sandman's power. Here, he wears green gloves with yellow shorts with red stripes and green shoes, and is once again a pallet swap of Bald Bull.

After a series hiatus, Mr. Sandman returns in the 2009 reboot of the Punch-Out!! series on the Wii, reclaiming his position as the WVBA World Champion. In his pre-match montage, Mr. Sandman is shown defeating every other character in the game (barring Donkey Kong) by K.O, and now sports his own body scheme. He has two new overhead punch moves (in addition to his classic "Dreamland Express" triple-uppercut combo), and has the ability to fake out Mac before he punches, usually during his "Dreamland Express" uppercut combo. If you lose to him, he will face the crowd and laugh maniacally, and wears his clothing from Super Punch-Out!!.

Mr. Sandman is also in the Title Defense Mode, once again as the final boss, trying to get the Title Belt back from Little Mac. In the pre-match montage, Mr. Sandman sees a picture of Little Mac and becomes furious, smashing a entire building into bits. He also wears a new outfit, with a new haircut and his boxing gear now almost all black. He uses all of his old attacks, including some copied from Mike Tyson such as some of Mike's punches and a "Wink Uppercut", during which he winks with either his left or his right eye to signal were the uppercut will be delivered from. Mr. Sandman also sports a mode called Berserker Rage, which occurs when he is knocked down two times in one round or knocked down three times total during the entire match. In the mode, he will throw fourteen uppercuts before becoming tired, giving Little Mac a chance to end the fight. If you try to punch Mr. Sandman, he throw a hook that depends on a quote, being either a slower left hook for "My turn!" and a faster right hook with "Hah!". If you lose to Mr. Sandman here, the animation that follows shows the referee trying to raise Mr. Sandman's hand, only to be lifted up himself.

In Super Smash Bros. Ultimate, Mr. Sandman appears as one of the game's various trophies. An Ace-lvel Attack-type spirit, he gives the user stronger fist-based attacks when used. In his spirit battle, the player must fight against a Donkey Kong on the Boxing Ring stage in a stamina match, with the Donkey Kong having stronger smash attacks and the floor making those unprotected against it fall asleep. 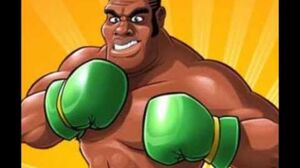 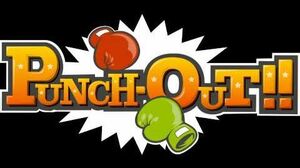