Mr. scratch
The Herald of Darkness

Agent of a "Much Greater Evil"

Mr. Scratch is the secondary antagonist of Alan Wake series.

He is the mysterious doppelganger of the author Alan Wake and manifests himself in the Dark Place, escaping to the real world in order to cause chaos and destruction to everyone with great evil and get rid of Alan Wake so that he can steal his life completely.

Mr. Scratch is the spitting image of Alan Wake himself and takes advantage of that. In his first recording, Mr. Scratch describes himself as being like Alan but "not being afraid to be the center of attention". In many of the recordings, Mr. Scratch demonstrates his sociopathy by brutally torturing and killing several unfortunate victims, all while either taunting or cryptically speaking to Alan (who is thought to be dead).

He speaks of how he'll even go as far as deceiving Alan's wife Alice until the eventual day to kill her. He also relates his awareness of being a villain in a story and how, in the world of Alan Wake's fiction, he will remain a villain.

He also prefers quiet and is shown to murder those who are too loud for his tastes, such as the party-goers in the recording (offscreen).

Mr. Scratch first appears briefly in the game Alan Wake, described by the brightly glowing Thomas Zane as being the one whom Alan's friends will meet on the other side. The doppelganger gives Alan an unnerving smile before vanishing. It is later shown that he escaped Cauldron Lake and made his way into Night Springs, Arizona, the fictitious setting of a Twilight Zone-esque series Alan once composed episodes for.

Prior to the release of American Nightmare, Mr. Scratch appeared in some promotional Internet vids for the DLC. In one, he tortures Sam Lake (the creator of the series whom Alan is an avatar of) while in another he kills him. Within another, he goes through the office of Remedy Entertainment, the game's developer, torturing and murdering employees. Aside from this, he also revels in the compliments from commentators praising his psychopathy.

In the story, Mr. Scratch gets ahead of Alan searching for something and resulting in those Alan encounters to initially suspect he is Scratch. At the Motel, Mr. Scratch manifests as the Darkness and kills the mechanic Emma Sloan when she refuses to heed Alan's advice about remaining in the light. At the Observatory, Dr. Meadows tells Alan that Mr. Scratch had appeared seeking out information regarding an unusual phenomenon in the sky and its signal but didn't understand the reading.

He also murdered and tortured individuals at the motel for when their party got out of hand. Throughout the game, he leaves Alan multiple recordings via old television sets, either demonstrating his horrendous acts or declarations that he could live Alan's life far better than he ever could.

She reveals that Mr. Scratch intends to make it so the sun never rises again, keeping the world in eternal night, via the Drive-In's projector room and a film of Alan made by Alice in memory of her disappeared husband. The incomplete signal from the Observatory is one of the pages with which Alan can restore reality and stop Mr. Scratch. Unfortunately, the incomplete page doesn't affect Mr. Scratch who cruelly gloats and sends Alan back in time.

Forced to repeat his actions two times more, Alan is able to save Emma from being killed the third time and get a complete readout from Meadows' printer. With these events set into motion, Alan is able to reset reality and show Alice's film. Mr. Scratch appears again in one final attempt to take out Alan, yelling that he only took what Alan "didn't have the balls to take". In the light of the projector showing Alice's tribute to her husband, Mr. Scratch begins to disintegrate and dies screaming that he deserves a life. 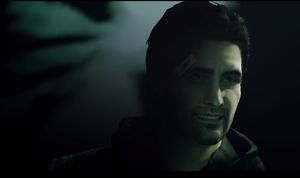 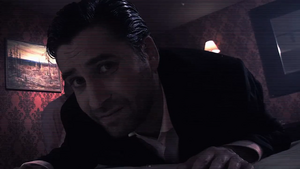 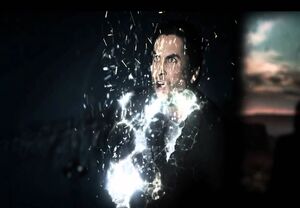