To gain wealth through his company.

Mr. Sivana is a minor yet pivotal antagonist of the 2019 superhero film, Shazam!. He was the founder of his company Sivana Industries, the husband of Mrs. Sivana, and the father of Sid and Thaddeus Sivana.

He was portrayed by John Glover, who also played Lionel Luthor in Smallville, Edward Nygma/The Riddler in Batman: The Animated Series, and Dr. Jason Woodrue in the 1997 film Batman & Robin.

In 1974, Mr. Sivana was in a car with his two sons Sid and Thaddeus in Upstate New York, driving towards his father's house. When Thaddeus was playing with his Magic 8-Ball, Sid swipes it from him, causing an argument between the two, which causes their father to yell at them to stop, but only berates Thaddeus, then Sid and his father mock him. Both himself and Sid had vanished as Thaddeus was being chosen and summoned by the Wizard, Shazam, before reappearing after his rejection. In his confusion and frustration, Thaddeus made a scene and caused a car crash, nearly killing the family. As Mr. Sivana berates Thaddeus for his scene, a truck crashes into their vehicle, severely crippling his legs. He ends up surviving his injuries and muttering words under his breathing and choking.

Mr. Sivana managed to recover after the incident, starting a business in his name titled Sivana Industries. He wore a wheelchair as a result of his crippled legs and would act as the CEO and board meeting host. Years later, both of his sons also had an involvement in the company, with Thaddeus attempting to return to the Wizard through the symbols in the encounters of people across the U.S.

After gaining the power of the Seven Deadly Sins, Thaddeus targets his father, who had been hosting a board meeting at his arrival. Thaddeus enters unannounced and uninvited, approaching his father and brother to get revenge on how he had been treated in his early life. Thaddeus then summons the Sins, who ruthlessly murder every member of the meeting, starting with his brother, Sid, who was thrown out the window. He then confronts his father, now cowering in fear and begging for his life through offerings, only to decide to leave the meeting room after being told that the Wizard has chosen his Champion, but not before leaving the Sin of Greed to kill Mr. Sivana (possibly via disembowelment based on the movement of Greed's arms) for displaying it.

Mr. Sivana was a very mean, strict, and abusive father to his sons or perhaps just his younger son, Thaddeus. He would act in a very aggressive demeanor to his sons (mostly Thaddeus) and was very greedy and often egotistical and a bit of a coward, giving anything simply to have his life spared.

Because of how he treated Thaddeus, he is one of the most hated characters in the DECU. Most fans, despite agreeing that Thaddeus killing him was too far, also felt he deserved it because of how abusive he was. Even his love for his other son becomes twisted once one realizes that he turned him into someone as terrible as himself while lacking his intellect. 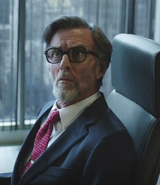 Retrieved from "https://villains.fandom.com/wiki/Mr._Sivana?oldid=3911156"
Community content is available under CC-BY-SA unless otherwise noted.