Strength
Knows how to take orders

Help Hook with his evil activities.

Convince his captain to leave Never Land as he, like the rest of his men, wants to go back to pirating (all failed).

Mr. Smee is Captain Hook's first mate on his pirate ship and the secondary antagonist of the Peter Pan franchise.

Although an antagonistic character, Smee was not truly evil; he simply obeyed his evil captain's orders. In the book, he reformed after Hook died. Smee was a sort of bungler, though Hook still kept him as his second in command. In the animated Disney movie, Smee helped keep the crocodile that wanted to eat Hook away from his captain, and the crocodile seemed to listen to him. Mr. Smee seems an oddly genial man for a pirate; Barrie describes him as "Irish", the only nonconformist among Hook's crew, and "a man who stabbed without offense" – and is portrayed in the multiple pantomimes or movies of Peter Pan as a rather stupid but entertaining man interested in loot rather than Hook's more evil pleasures.

Smee typically represents a humorous side to pirating, often portrayed as a portly man with a bulbous nose and red cheeks, although Barrie hinted at a darker side. When captured by Hook, every child in the brig loves Smee – he cannot lay a fist on them and does their darning – despite his belief that they fear him. Hook considers that Smee has good form without knowing it, which is of course the best form of all. He almost tears into Smee for this but knows that clawing a man for having good form is very bad form. Smee offers to save Wendy from the plank, if only she promises to be his mother – an offer she refuses, in Barrie's words, "Not even for Smee". Smee's position on the Jolly Roger is presented inconsistently (in a sense, it could be said that "no two 'Smees' are alike"). In Peter and Wendy, he is identified as the ship's bo'sun. He is one of the two pirates (the second is Starkey) who survive the final battle between the children and the pirates.

In Peter Pan in Scarlet, he has moved into the Underground Home of the Lost Boys. He leaves Neverland by the end of the book and opens up a shop that sell souvenirs collected from Neverland.

Peter Pan and the Pirates

In Peter Pan and the Pirates, Mr. Smee (voiced by the late Ed Gilbert in an Irish accent) is Captain Hook's right-hand man. His weapon is named Johnny Corkscrew. He is small, but not very thick, has gray hair and pale blue eyes. His biggest difference from the other pirates is that he is often clumsy and not really able to capture one of the Lost Boys (as seen in "Slightly Duped" and "Play Ball").

In Steven Spielberg's 1991 film Hook, Smee (portrayed by the late Bob Hoskins) and Hook's relationship takes on an almost intimate tone, at times even resembling an old married couple or a master/servant arrangement. Smee is allowed access to Hook's private quarters, is seen preparing meals for the Captain and even helps him disrobe before bed. When Hook threatens suicide, he makes it obvious that he expects Smee to stop him, to which Smee replies "not again". Hook also confides all of his darkest and most personal thoughts and concerns to Smee, seemingly exclusively. When Hook admits (untruthfully) that he wants to die, Smee embraces the captain and kisses him on the cheek to dissuade him. He also convinces Hook that they should try to convince Peter's children, Jack and Maggie, to remain in Neverland permanently by using his repeated broken promises and prolonged absences as examples.

Bob Hoskins reprises the role of Mr. William Smee in the 2011 miniseries Neverland.

A ship of pirates is anchored off Never Land, commanded by Captain Hook with his sidekick, Mr. Smee. Hook boldly plots to take revenge upon Peter Pan for cutting off his hand, but he trembles when the crocodile that ate it arrives; it now stalks him, hoping to taste more. Hook also forms a plan to find Peter's hideout using the knowledge of Tiger Lily. The crew's restlessness is interrupted by the arrival of Peter and the Darlings. The children easily evade them, and, despite a trick by jealous Tinker Bell to have Wendy killed, they meet up with the Lost Boys: none of them suspecting that Captain Hook is placing his plan into motion, and he requires Smee's assistance.

Meanwhile, Peter takes Wendy to see the mermaids. Wendy is considering leaving when the mermaids try to drown her, but things change when the mermaids flee in terror at the sight of Hook. Peter and Wendy (who quickly spy on Hook) see that he and Smee have captured Tiger Lily, so that they might coerce her into revealing Peter's hideout. Peter and Wendy free her, and Peter is honored by the tribe. Hook then plots to take advantage of Tinker Bell's jealousy of Wendy, tricking her into revealing the location of Peter's lair. However, his plan to kill Peter becomes a bit compromised when Tinker Bell makes him promise "not to lay a finger, or a hook, on Peter Pan". He agrees, and then locks Tinker Bell in a lantern as a makeshift jail cell. Wendy and her brothers eventually grow homesick and plan to return home. They invite Peter and the Lost Boys to return to London and be adopted by the Darling parents. The Lost Boys agree, but Peter is so set against growing up that he refuses, presumptuously assuming that all of them will return shortly. The pirates lie in wait and capture the Lost Boys and the Darlings as they exit, leaving behind a time bomb to kill Peter. Tinker Bell learns of the plot just in time to snatch the bomb from Peter as it explodes.

Peter rescues Tinker Bell from the rubble and together they confront the pirates, releasing the children before they can be forced to walk the plank. Peter engages Hook in single combat as the children fight off the crew, with Smee unsuccessfully attempting to escape. Hook and his crew flee, with the crocodile in hot pursuit.

Mr. Smee plays a less significant role in this movie, but is still seen giving advice to the captain.

That night, Captain Hook, still seeking revenge against Peter Pan, breaks into the Darling home, and kidnaps Jane while she is sleeping, believing her to be Wendy. Smee ties her up, gags her, apologizes for doing so, and flies back to Never Land on his ship to use as bait for Peter. Once in Never Land, he drops Jane into the waiting tentacles of "the beast" (a giant octopus), expecting Peter to also be devoured by it as he dives after Jane to save her, along with Tinker Bell. Peter rescues Jane, and the octopus tries to eat Hook instead but Hook is rescued by Smee. However, the octopus enjoys the taste of Hook so much (just like the crocodile) that he decides to go after him.

Peter and the Lost Boys make Jane the very first Lost Girl (as a coyote) and they celebrate. However, one of the Lost Boys finds the whistle and blows it. Hook and his crew arrive and capture Peter and the boys, but let Jane go as a thanks for "helping" them. Despite Jane denying that she wanted to help Hook in this way, Peter calls her a traitor for lying to him and tells her that since she said that she does not believe in fairies, Tinker Bell is dying.

Jane, realizing it is her fault, rushes to the Lost Boys' home, and her repentant tears and renewed belief revive Tinker Bell. They both hurry to the Jolly Roger, where they find the Lost Boys tied up and Peter (tied to an anchor) about to walk the plank. Jane saves him and with the help of "faith, trust, and pixie dust", she learns to fly and unties Peter. Hook's ship is sunk by the octopus, leaving him and the pirates to exit on a rowboat with the octopus pursuing them, seeing them all as sardines.

Mr. Smee makes a cameo in the 2014 film The Pirate Fairy. In the epilogue, he was seen being ordered by James into getting him out of the water.

In the film Hook Mr. Smee is played by the late Bob Hoskins and devises the scheme to kidnap the children of Peter (who has now grown up) and make Hook like him more than Peter. It is unknown what happens to him at the end.

Mr. Smee appears in Pan as a supporting character, before he became Hook's first mate.

He is portrayed by Adeel Akhtar.

In a animated child fairytale tv show, he appear has friendly figure, but still doesn't know what a mother is, until Captain Hook's defeat, he seem to be the son of a widowed gypsy who lives in a caravan, and was worried about his disapearence like every other parents when all their sons disappear, but they are all happily reunited.

It seem to be the uncle of a auradon student, who seem to be African-American, but he is only mentioned by him when him and his friend wanted to take proof from Isle Of the Lost, maybe revealed that Smee is African American also. He has a son named Sammy.

Mr. Smee appears in Kingdom Hearts as an inhabitant of Neverland, and is the only other human member of Hook's pirate crew other than Hook himself to appear in the series; the rest of the crew consist of Heartless.

Smee is seen with Captain Hook in Neverland. Smee appears to be Captain Hook's right hand man and also his only human companion. Smee assists his captain in the capture of Peter Pan and trying to make Sora and company walk the plank. The last factor that effects him is when the party tries to get Captain Hook to come out Peter Pan mocks Smee's voice. This shows that (obviously) Captain Hook has a lot of trust in Smee.

Mr. Smee is mentioned inaccurately in the movie Little Women; one of the characters, Jo, is a Dickens-fanatic who wonders if Laurie is a captive "like Smee from Nicholas Nickleby". The character she is referring to is called Smike and is a schoolboy from Dotheboys Hall who was constantly abused by the cruel headmaster Wackford Squeers.

Mr. Smee is in the show from Once Upon a time when he helps Rumpelstiltskin to get his son back then he helps with Captain Hook 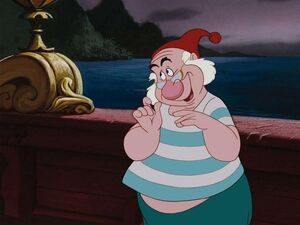 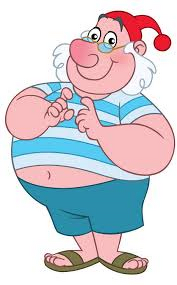 Mr. Smee as seen in "Jake and the Neverland Pirates". 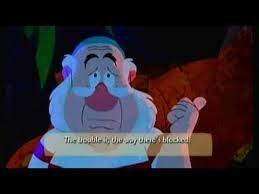 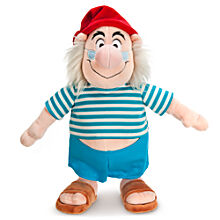 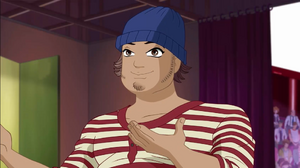 Smee as he appear in "World of Winx". 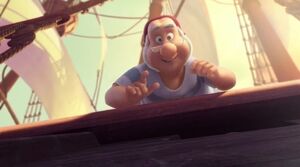 Smee, as he appears in Pirate Fairy 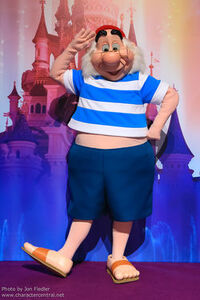 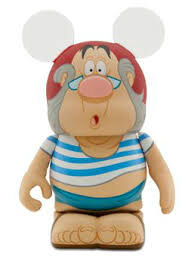 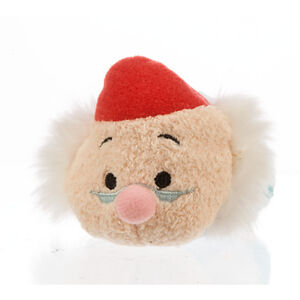 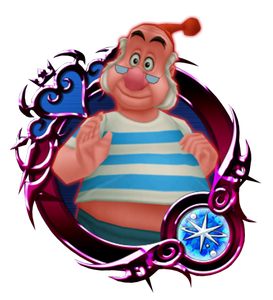 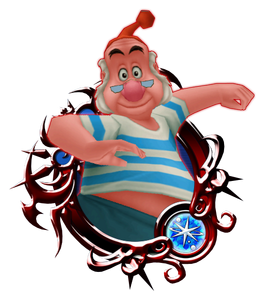 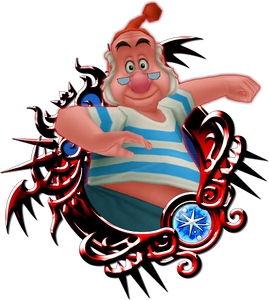