Get his share of half of the fortune (failed).

Mr. Snoops is a major antagonist in Disney's 23rd full-length animated feature film The Rescuers, which is based on the 1959 British children's novel of the same name by the late Margery Sharp. He is Madame Medusa's right-hand henchman.

He was voiced by the late Joe Flynn, who also played Havershaw in Disney's The Love Bug, Finley Hooper in Million Dollar Duck, and Francis X. Wilbanks in The Barefoot Executive.

Snoops is the typical minion; fearful, timid, cowardly, pusillanimous, and basically a yes-man to Medusa. He attempts to be a serious bad guy, but he fails miserably, as he doesn't always handle Penny's strong personality.

Mr. Snoops is the greedy henchman of Madame Medusa but the two shared little love for each other and often bickered. However, their mutual greed would keep them together (however dysfunctional) and the pair hatched an evil scheme to kidnap the young orphan Penny and use her as child-labor in their efforts to obtain the unique and highly valuable Devil's Eye diamond. He also fears the two crocodiles named Brutus and Nero.

Despite having done his part of it, he is still forbidden to keep even half of the diamond. When Penny takes the diamond to Medusa, she swiftly shows the jewel to Snoops but leaving him nearly no time to examine it, causing Snoops to drop the bucket which Penny was using as an elevator so he could see desperately the diamond, nearly dropping Penny into the cage. Back at the boat, Medusa threatens him and Penny with her rifle, and then he tries to get the diamond himself, demonstrating that she likely never intended to pay him for his help.

Eventually, he is blamed for his own fireworks being shot on the boat. As Medusa is catapulted, Snoops is last seen on a piece of wood (used as a raft), with his clothes being torn, he points and laughs at her before escaping by paddling away, leaving her to her fate. It is unknown if Snoops managed to escape from the Devil's Bayou and even if he did so, he was possibly taken in custody by the police as Penny could have told her adoptive parents about his involvement in her kidnapping. 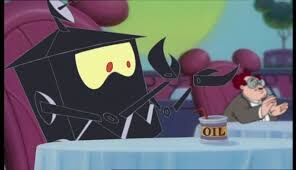