The Great Tinkles (by himself)

Make all of the humans allergic to dogs, so that the dogs will be put away.

Dominate the world with the dogs out of the way (both failed).

Mr. Tinkles is the main antagonist of the 2001 film Cats & Dogs, and a supporting antagonist of its 2010 sequel Cats & Dogs: The Revenge of Kitty Galore. He is a selfish, cruel, ruthless and pompous Persian cat who has a hatred of dogs and will stop at nothing to make people everywhere be allergic to dogs and he is also the archenemy of Lou and Butch.

He was voiced by Sean Hayes.

Mr. Tinkles first appeared when he and his henchman were discussing about dogs being out of the way. To break in Dave Brody's lab and prevent the anti-allergy dog formula from being created, he sent in cat ninjas and later the russian. After both adversaries failed, the formula was eventually completed.

Mr. Tinkles learns of this and then he and his cat henchmen drove to a Christmas building factory (pretending to be his owner Mr. Mason) and fired all the human workers in order to take over the factory. He then took the Brody family hostage and demanded that their dog Lou must deliver the formula and all its notes or the family would "be put to sleep". Just as he did, the cats took it and Mr. Tinkles refused to let the family go.

At the factory, Mr. Tinkles summoned thousands of mice to work for him. Just then, Lou, Butch, and the other dogs arrived just in time to stop Mr. Tinkles. Mr. Tinkles drove an excavator and used the claw as a weapon. He caught Butch and attempted to crush him in the shredder, but Lou defeated him by firing a snow gun at him and was presumed dead when the factory blew up. However, he survived the blow-up and was taken into custody by Mr. Mason's maid to live with her and her sisters and wore a lot of costumes.

Mr. Tinkles returns in the 2010 sequel, but Kitty Galore had taken his place as the main antagonist. Instead, Mr. Tinkles (arguably) acts as a supporting antagonist. He is detained on Alcatraz Island, and, alongside the creepy prisoner in the cell next to him, is a reference to Hannibal Lecter. He gives the group of animals a riddle on what to do about Kitty Galore. After her defeat, it was reported that Mr. Tinkles escaped. 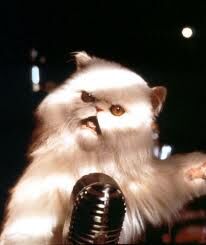 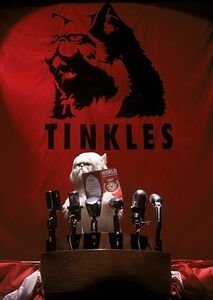 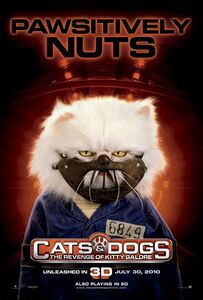 Mr. Tinkles in the sequel