Fireballs projected from his eye and even flaming

Mr. Titan is a high-ranking officer of Black Satan and a major antagonist in Kamen Rider Stronger.

His human form is that of a well-dressed man who wears sunglasses and smokes a cigarette. He often fusses over the state of his clothes and at one point bursn the eye of a Black Satan combatant with his cigarette for bumping into him and ruffling his jacket.

He dies about a third of the way through, but is later revived as Hundred-Eyed Titan and develops a heated rivalry with fellow Black Satan official General Shadow to defeat Stronger.

He was portrayed by Akira Hamada, who would go on to portray Juzaburo Namba in Kamen Rider Build 43 years later.

Titan's only known history, as briefly mentioned in Hirayama Toru's book "My Beloved Characters", was that 'Titan' is in fact his real name, not an alias. Initially a particularly talented criminal, he discovered the existence of Black Satan and joined of his own will, eventually becoming one of the organization's top commanders. He was nicknamed "the first human fireball" for his incredible internal temperature, which he boasted as being "80,000 times hotter than magma".

Mr. Titan first encountered Shigeru in the lobby of a hotel. Even before the two know each other it is clear they don't like one another, with Shigeru making a disparaging and uncomplimentary remark about the Titan's 'stuck up' manner.

Titan has no qualms about sacrificing his own men so long as victory is achieved, this becomes apparent when he sent a kaijin ElekiIka to simply keep Stronger occupied while his men bombarded both of them from a distance, much to the monster's surprise and anger.

Titan's obsession with destroying Stronger would lead him to go through with a number of dangerous upgrade procedures, the first of which was to increase his already astronomical internal temperature to three times as hot. After the operation's success, Titan claimed his power level was at '24,000', twice as much as Stronger.

Titan prepares to battle Stronger for the first time the subsequent battle with Stronger was brutal for the Rider. Titan proved impervious to any physical attack and easily shrugged off Electro Fire and Electro Waterfall with no effort, then attacking with his powerful Titan Destruction Gun, fireballs projected from his eye and even flaming pieces of his scarf. Even Stronger's powerful Electro Kick was easily knocked aside midair, after which Titan swung Stronger Only with quick-thinking was Stronger able to discern Titan's weakness and throw him into the sea, dousing his heat and finally killing him.

However, Stronger would not be rid of Titan yet. Black Satan recovered his body and, deliberately leading Shigeru and Yuriko to a church, were able to revive him with a drop of blood from Shigeru's metal hands, giving him new life as One-Hundred Eyed Titan.

However, unfortunately for Titan, a new commander had been chosen in his absence, the mysterious General Shadow. A hated rivalry erupted between the two over who would be the one to finally kill Stronger, with Shadow often sabotaging Titan's numerous schemes and then denying any involvement, only adding to Titan's frustration.

Titan would challenge Stronger once again to one-on-one combat in the Great Desert, where a short but violent struggle left both of them near death, Titan managing to teleport away to Black Satan's secret base to receive treatment. He would spend the rest of the incident severely weakened, needing a cane to get around, but still vigorous enough to have Shigeru tied to his jeep and dragged across the desert. Although badly beaten and parched, Shigeru managed to escape once more and killed Black Satan's newest monster, Kikkaijin Arijigoku, an antlion creature.

Titan and Stronger's final battle would take place at the base of an active volcano, with Titan emerging from a lake to illustrate how he had once again been upgraded so that not even water could harm him. Despite this, Stronger again defeated him, sending Titan stumbling up the slope of the volcano mortally wounded.

Titan looked down a deep fissure that lead straight to the volcano's boiling innards and extended a handshake to Stronger, planning to pull them both down so that they might die together, but the Rider easily fended it off. Defeated, Titan screamed for the glory of Black Satan before his head crumpled and he caught flame and fell into the depths of the volcano, being finally killed for good.

After escaping from the ensuing eruption, Shigeru silently told Titan that he was a truly formidable and antagonistic enemy. 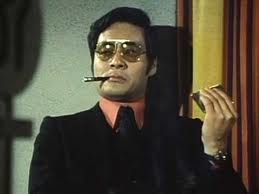 Mr. Titan's human form.
Add a photo to this gallery

Retrieved from "https://villains.fandom.com/wiki/Mr._Titan?oldid=3286883"
Community content is available under CC-BY-SA unless otherwise noted.