Villains Wiki
Register
Don't have an account?
Sign In
Advertisement
in: Food, Possessed Objects, Collector of Souls,
and 16 more

Escape the game and feed on unlimited code.

Mr. Tomatos is the titular main antagonist of the video game Mr. Tomatos. He is an anthropomorphic floating tomato who loves eating, and wants the player to feed him. However, he becomes increasingly angry and hostile as the player feeds him the wrong food.

However, when the player feeds him the wrong food, he will become increasingly angry. Once his anger reaches ten, he will be given a more demonic appearance in a deformed version of the kitchen. He will ask the player to feed him one of three body parts (Brain, eyeball, hand). Afterward, he would attack the player and the game will end.

There is also an ending involving the knife which can be bought from the in-game shop for 500 points. If the player stabs Mr. Tomatos, he will congratulate the player for finishing the game before dying. Note that after his anger reaches ten, the knife cannot be used.

Once the player reaches a certain amount of points, he will gain a demonic appearance with no eyes and a long tongue. He will congratulate the player for completing the game, but then tells the player to give him their soul. He then engages in a boss fight-like section where the player must use bottles of poison to defeat him. Each time the player uses a bottle of poison, his anger will begin to rise. The player must replenish his anger with regular snacks, making the battle longer. If they succeed, he will say "You won" to the player before exploding into a mass of glitching, ending the game.

However, if the player simply poisons Mr. Tomatos non-stop causing his anger to reach ten, he will attack the player. This will cause the game to end.

If the player manages to reach the end of the game, he will thank the player for their help and will give the player a text file named "USELESS TEXT" before telling them to leave the game and never come back. If the player were to replay the game, they are greeted with an empty, grey kitchen. Suddenly, a deformed Mr. Tomatos will appear and scold the player for disobeying his order. He would then attack the player and the game will end. 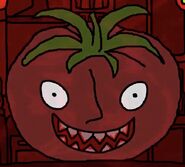 Mr. Tomatos when his Anger level reaches to 10. 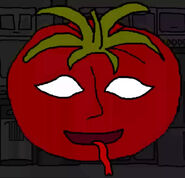 Mr. Tomatos if you throw out all the food products. 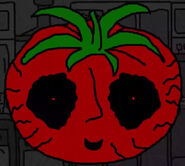 Mr. Tomatos if you disobey his orders by coming back to the game. 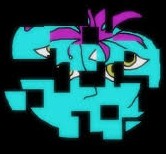 Mr. Tomatos after the global deletion.