Kill every Boxtroll in Chessebridge to perform "hero work" (formerly).

Mr. Trout is one of the antagonists-turned-supporting protagonists (alongside Mr. Pickles) of the 2014 film The Boxtrolls.

He was voiced by Nick Frost, who also played Flynn in Ice Age: Continental Drift.

Mr. Trout is one of three minions of Archibald Snatcher. He used to work for him by eliminating all of Boxtrolls in the town, but he and Mr. Pickles were thinking if they are really the good guys who fight the evil boxtrolls. He also obeyed everything Mr. Snatcher said, like give him cheese although they're aware that he's allergic, because they were afraid of him.

When Eggs finally enters the cheese factory for save his friend Fish, Archibald told them to capture the boy because Eggs is the missing child who was supposedly killed by the Boxtrolls, so he told them to capture the boy before the mayor found out the truth. So they finally found the Boxtroll's hiding place and capture all of them, but they are still arguing if they are the good or the bad guys.

When Snatcher finally gets the white hat from the mayor of Cheesebridge Lord Portley-Rind, they see the mayor's daughter; Winifred Portley-Rind approach them and tell them to stop because what they are doing was bad. Winnie also states that the town's people see them as evil henchmen rather than town exterminators, but decided to redeemed themselves by freeing Eggs. They also help Winifred to make their former boss crazy by tossing the white hat towards each other, when they think is all over and applause Eggs in front of the cheese mountain. Mr. Snatcher came out with a hideous allergy face and see him drag Winifred, Eggs, Lord Portley-Rind and Fish at the end.

After Archibald Snatcher's death, he and Mr. Pickles seem to be the town's janitors, wondering if they will make a second chapter of themselves after their redemption. 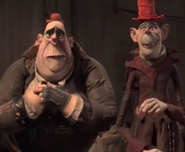