Loyalty to his wife's farm

Spying on the chickens.

Get back at his wife (succeeded).

Willard Tweedy, or better known as Mr. Tweedy, is the secondary antagonist of DreamWorks' 4th full-length animated feature film Chicken Run, which is Aardman's 1st feature film. He is Mrs. Tweedy's husband who helps her run the farm and is often sent to check on the chickens.

He was voiced by the late Tony Haygarth.

Mr. Tweedy is a bumbling, clumsy, obstinate, pertinacious and ill-tempered individual. He is dominated by his wife, Melisha Tweedy, whom he is in terror of due to her verbal abuse and sometimes physical outrages against her husband. There is certainly no love lost between the two of them (though at a random moment in the film, Mr. Tweedy does call his wife by the term of endearment "love", indicating that there may be some love between them, though not much). Mrs. Tweedy treats him more as if a servant than an equal partner and repeatedly undermines his self-worth, as well as references to his ancestors as poor worthless nothings.

While he is generally absentminded, oblivious and dull, Tweedy is rather "simple, not stupid" instead of outwardly dumb. It was this lack of wits that allowed him to understand that the chickens were actually very plotting and organized whereas his more intelligent wife disregarded them as "the most stupid creatures on this planet". Tweedy appears to have more mechanical skills, as he was able to rebuild the pie machine himself, albeit with some complications initially.

He also appears to have a genuine dislike for the chickens that he usually farms, as he shouted aggressively towards the onlooking hens after he trapped Ginger in a coal bin, similar to a prison warden demoralizing his inmates who attempted an escape. He is also especially disparaging and contemptuous towards Ginger, the leader of the flock as she repeatedly embarrassed him in front of his wife. This grudge was evident when he vengefully chose her to demonstrate the pie machine, claiming, "I've got a score to settle with you." Despite his obnoxious and abusive nature, he eventually turned happy and calm.

Mr. Tweedy wears a dark green shirt and dark green pants, a brown vest, a yellow dress shirt, and a blue scarf around his neck. He also has a hat and black boots. He is also has short brunette hair and has brown eyes. He is also short and overweight, compared to his wife who is taller and thinner.

Mr. Tweedy always obeyed Mrs. Tweedy's orders, no matter how unreasonable or foolish they may seem.

During the climax of the film, Mr. Tweedy learns that the chickens have stolen many of his tools to create an aircraft to escape, but they just tie him up. He attempts to stop them from going airborne by knocking out the ramp, but faints after almost being knocked out by their airplane. Mrs. Tweedy would later deal with the chickens, but she ends up falling into the pie machine, causing it to explode.

Mr. Tweedy manages to untie himself and evade the destructive explosion, and as he returns, he sees Mrs. Tweedy covered in gravy and their factory destroyed. He then berates her for not listening to him about the chickens in the first place, but this only makes Mrs. Tweedy angrier at him as she attempts to shout at him. Finally having had enough of this, Mr. Tweedy pushes the door down on Mrs. Tweedy, much to her shock. It is unknown what happened to Mr. Tweedy afterwards. It is assumed that he may have moved off the farm and started a new life on his own. 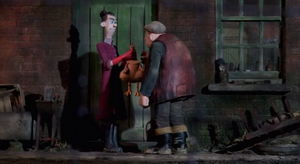 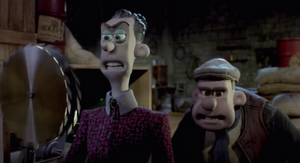 Retrieved from "https://villains.fandom.com/wiki/Mr._Tweedy?oldid=2866263"
Community content is available under CC-BY-SA unless otherwise noted.