Terrorize and kill everyone in his way including Victor, his dog Sparky and even the Weird Girl (failed).

His vocal sound effects were provided by Michael Welch, who also played Larry in Fillmore!.

Although he is the main antagonist, he shows no signs of villainy before his mutation with a dead bat. Mr. Whiskers appears in the beginning as a white fluffy Persian cat while Weird Girl carries him where Victor and Weird Girl met after school and his poop tells the sign of the future. At Frankenstein Family Home, Mr. Whiskers spotted out the Attic, he went to taunt Sparky and he chases Mr. Whiskers and went on top of the flamingo statue and causes Sparky to mess up Mr. Burgermeister's garden. Next scene, he found out Sparky was alive when he explore around town.

When the other Kids find out Victor's Secrets, They reanimate the dead animals come back to life but worse, Mr. Whiskers had the dead vampire bat Weird Girl was using as an experiment to make the bat come back to life, but she mistakenly shocked Mr. Whiskers with the bat in his mouth. When the Weird Girl's experiment was complete, she saw Mr. Whiskers beginning to change, the vampire bat began taking over his personality. He grow fangs that become bigger and sharp, his neck became long and his fur became black and spiky and his arms and legs stretched big and scrawny, eyes changing into ugliest big eyes and his big bat wings sticks out of his back and becomes a hideous Vampire Cat. Showing no traces of the what once was Mr. Whiskers, the vampire cat flies menacingly and went out of the house and terrorizes people with other monster pets.

Before his mutation, Mr. Whiskers was very quiet and nonviolent, as he would often stare at other people and animals, and would meow occasionally. Whether he was actually dreaming about them is unknown but possible. He seemed to like his owner. He appeared to like bothering the dogs though, as he comes to Victor's house and appears to taunt Sparky, leading to the dog chasing him.

When he transformed into the Vampire Cat, his personality transformed as well. He was also increasingly obstreperous, aggressive, and dangerous, as he screeched loudly and attacked others unprovoked. He also seemed to frighten his victims intentionally, as he slowly follows Elsa and Persephone while hissing at them and screeched at Sparky during their battle as if trying to scare him and appeared to be vituperative and furious when Sparky didn't seem scared. However, even when he mutated, he never attacked Weird Girl, suggesting some memory of his past. 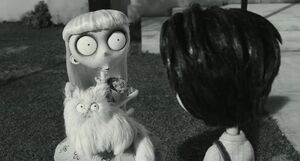 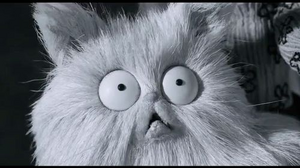 Mr. Whiskers looking at the sky. 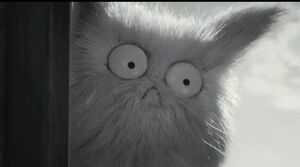 Mr. Whiskers first death by getting hit by either a car or train. 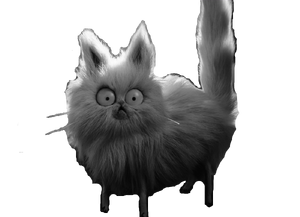 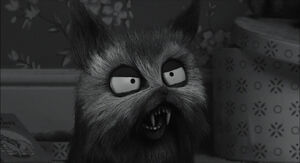 Mr. Whiskers during his transformation. 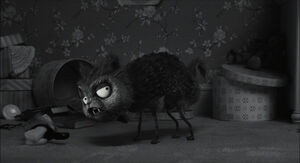 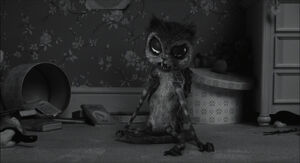 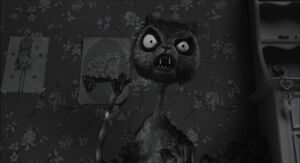 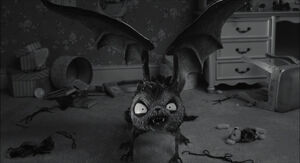 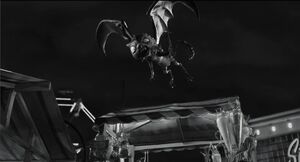 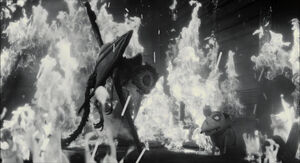