Founder and Leader of Quantum

Masterminding Quantum and its nefarious operations.

Gain money and further Quantum's goals and to kill James Bond at all costs (formerly; failed).

Protect his own daughter Madeleine Swann by having James Bond keep her safe from Blofeld and his organization.

Friedrich König, better known as Mr. White, is the secondary antagonist of the James Bond rebooted series, serving as the secondary antagonist of Casino Royale, a major antagonist in Quantum of Solace, a minor anti-hero in Spectre, and a posthumous antagonist in No Time to Die. He is one of the main leaders of a criminal organization called Quantum, which helps support terrorism, and is only seen a few times, with his exact role in the organization never specified.

He is later revealed to be the father of Madeleine Swann and that Quantum is revealed to be an affiliate of SPECTRE, a terrorist organization that was responsible for Quantum's foundation. He is also revealed to have murdered the family of Lyutsifer Safin with dioxin.

He was portrayed by Jesper Christensen, who also played Dieter Vogel in the 2010 film remake of The Debt.

White is seen introducing Le Chiffre to the terrorist named Steven Obanno, and arranges for Le Chiffre to bank Obanno's money. White is next seen after Le Chiffre has lost Obanno's money. Following Obanno's death, Le Chiffre tortures Bond, but the door bursts open and Mr. White enters with a silenced pistol, kills many of Le Chiffre's henchmen (including Valenka and Kratt) before aiming at Le Chiffre. Though Le Chiffre tries to reason with Mr. White by telling him that he will get the money back, White refuses by explaining that Quantum can no longer trust Le Chiffre. As such, Mr. White kills Le Chiffre by shooting him in the face, ironically saving Bond's life, who will become Quantum's main enemy.

It eventually turns out that Mr. White only spared Bond in order obtain the password for the poke winnings. In the end, Mr. White succeeds in obtaining the poker winnings following the death of Vesper Lynd, much to Bond's distraught. When Mr. White returns to his villa on Lake Como, he receives a phone call. While answering the call, he is shot in the leg and falls to the ground. As he tries to crawl into cover, he is approached by Bond, who takes him captive for interrogation by MI6.

The next film begins with Bond and M questioning White, who states that his organization has people everywhere. Upon this statement, M's bodyguard Craig Mitchell opens fire, and Bond pursues him out of the room. In the ensuing confusion, White escapes, but Mitchell dies. Mr. White is later seen at an opera house in Bregenz, Austria, where he has come to meet with other members of Quantum (arranged by Dominic Greene of Greene Planet). During the opera, the Quantum members discuss their Bolivia project through small headsets. Bond uses a headset previously taken from a Quantum member to trick the members into leaving the opera and takes photos of everyone who leaves, providing MI6 with valuable information about Quantum's top agents. However, Mr. White plays wise to this by removing his headphone and remaining seated to avoid being caught. He tells the woman next to him that "Tosca isn't for everyone" as a lighthearted reason for his partners leaving the room as a way of feigning ignorance and remaining conspicuous. Following the deaths of Greene and General Medrano, Bond learned that Vesper's boyfriend Yusef Kabira is a Quantum agent who faked his kidnapping in order for Mr. White and Greene to coerce Vesper into working for them in the first place. Following Kabira's arrest and Quantum's dissolution, Mr. White remains at large.

Following the deaths of Raoul Silva and M, it was revealed that Quantum itself is a subsidiary of SPECTRE, which would make Mr. White incidentally a member of the latter organization; even Le Chiffre, Greene, and Silva were all revealed to be agents working for SPECTRE. It also turns out that Mr. White was nothing more than a mere pawn alongside Vesper, Kabira, Le Chiffre, Greene, and Silva; all of them used by Ernst Stavro Blofeld (the leader of SPECTRE) in his true plot of inflicting psychological pain on Bond, who happens to be Blofeld's adoptive brother.

While Mr. White commits several murders and countless acts of terrorism, however, even he has limits; when SPECTRE begins trafficking and murdering women and children, Mr. White quits in disgust. Angered by his betrayal, Blofeld puts out a ocntract on Mr. White's life, which leads to him going into hiding. However, he is also dying of thallium poisoning, which was sent to him through his phone. After locating him at an abandoned house at Austria, Bond shows Mr. White a ring which bears an inscribed octopus from assassin Marco Sciarra. Mr. White tells Bond to find his estranged daughter Madeleine Swann as she has the knowledge Bond needs to know about SPECTRE, giving him a name 'L'Americain', which happens to be a Moroccan hotel where Mr. White has hidden coordinates to SPECTRE's North African facility. Mr. White also makes Bond promise to protect Swann before bidding farewell and shooting himself in the head with Bond's gun. Bond then mourns for Mr. White by closing his dead eyes before leaving to find Swann.

It later turns out that Mr. White's suicide was recorded through a video surveillance system controlled by SPECTRE, and after capturing Bond and Swann in his North African facility, Blofeld used the footage to deeply traumatize Swann, saying that Mr. White was too weak to see exactly what Blofeld was planning for the world. This made Swann realize that while Mr. White did terrible things, he was still a good father to her at his best.

Eventually, Bond and Swann got full closure for Mr. White's death by foiling Blofeld's plot to control all of the world's intelligence systems and getting him arrested for crimes against humanity.

No Time To Die

Five years following Blofeld's arrest, things took a turn for the worst when Lyutsifer Safin took control of a nanobot project (created by rogue MI6 scientist Valdo Obruchev) that would act as a virus, and has formulated a successful plot to unleash the nanobots to destroy SPECTRE; even managing to trick Bond into murdering Blofeld by infecting him with the nanobots.

Following Blofeld's death, Swann confessed to Bond that Mr. White murdered Safin's family with dioxin on Blofeld's orders during their early days working in SPECTRE when Safin was a child. This event is what led Safin to be facially disfigured and growing up to be a wanted terrorist, vowing revenge on SPECTRE (mostly both Blofeld and Mr. White) for this. It was also revealed that Safin murdered Swann's mother in 1998, which was the main reason why Swann broke her ties with Mr. White in the first place. Even when after learning that Mr. White committed suicide out of complete remorse after his fallout from SPECTRE and that Blofeld was arrested and taken into custody, Safin still wanted revenge. It was also revealed that Swann gave birth to Bond's daughter Mathilde several days following Blofeld's arrest, thus posthumously making Mr. White a grandfather to Mathilde.

In the end, Bond kills Safin and his men and joins Mr. White in death by sacrificing himself in a missile explosion to destroy the nanobots and foil Safin's plot for good.

Mr. White is a man as mysterious as Quantum and SPECTRE who wants, above all, to maintain the anonymity of these organizations, which he persists in never mentioning. As a result, he is not cowardly enough to disclose the existence of the factions when subjected to interrogation pressure by intelligence services such as MI6, and his numerous contacts and undercover agents may allow him to escape easily to captivity. In addition, White is also determined to maintain Quantum's reputation, whether by executing associates that displease him or simply by indicating to other terrorist groups that he is not responsible for their incompetence. Although he prefers to let his subordinates do the dirty work for him and pull strings in the shadows, the terrorist can nevertheless get his hands dirty if necessary.

However, despite his cold, ruthless, and calculating temperament, White is not necessarily a heartless individual since he cannot, in particular, resolve to contribute to, or even stomach it when SPECTRE gets into the business of human trafficking, which involves selling women and children into sex slavery, so he left the organization for that. He also had genuine care for Madeleine, whom he wanted to keep safe, far from his life as a criminal, so as not to endanger her; he even entrusted Bond to protect her from the wrath of Blofeld before killing himself. White also enjoys using his wealth and his position as a high-ranking criminal to buy expensive costumes and thus adopt the appearance of a refined and polite person while settling in a number of splendid dens like his villa on the shore of Lake Como, in Italy, and the chalet in which he is hiding in Altausee, Austria. 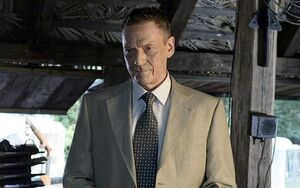 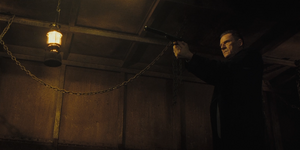 Mr. White getting taken by Bond. 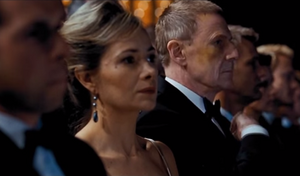 Mr. White evading Bond by remaining seated at the opera. 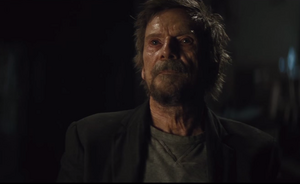 Mr. White at his safehouse in SPECTRE. 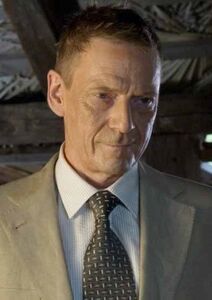 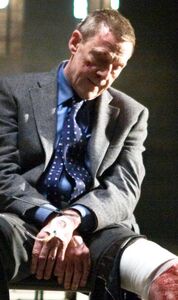 Mr. White in Quantum of Solace. 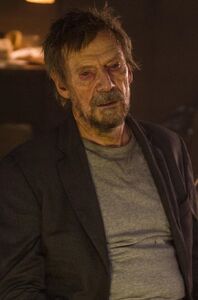 Mr. White about to commit suicide after making Bond promise to protect his daughter Madeleine.