Kill children who move into his location (pre-story; repeatedly succeeded).

Mr. Widemouth is the titular antagonist of the eponymous Creepypasta. He is a creature that resembles a Furby toy, although he remarks that he is better than one. He repeatedly attempts to coax the narrator into engaging in violent or self-injurious behavior, and is heavily implied to have caused the deaths of numerous children this way.

On the third or fourth night, Mr. Widemouth says he has a new game they could play and takes the narrator to the room at the end of the corridor, where he tries to convince him to jump out a window, saying that he'll bounce back up if he imagines a trampoline. However, the narrator doesn't think his imagination is strong enough and refuses. The next morning, Mr. Widemouth tries to convince the narrator to try and juggle knives, but the narrator refuses because he's not allowed to touch knives (he's only five at the time) and knows that it is not safe to throw them.

The narrator starts having trouble sleeping, mostly because Mr. Widemouth keeps waking him up in the middle of the night trying to convince him to jump out the window by telling him that he put in a real trampoline that he won't be able to see in the darkness, but he always refuses.

One morning, the narrator is finally well enough to go outside. Mr. Widemouth is waiting for him and shows him a trail, telling him that he's had many friends and he always takes them down the track at some point, but the narrator can't go yet. He tells him he can go down soon, but two weeks later his family decides to move again. The narrator doesn't tell Mr. Widemouth because, although he's only five, he realizes he doesn't trust Mr. Widemouth. As they leave, the narrator sees Mr. Widemouth holding a steak knife.

Years later, the narrator returns and discovers the house no longer exists, as it burned down a few years after his family moved away, and Mr. Widemouth is gone. He then goes down the path, and discovers it leads to a graveyard, where a lot of the graves belong to children. 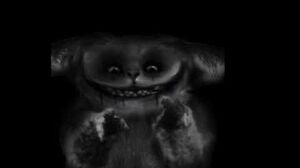 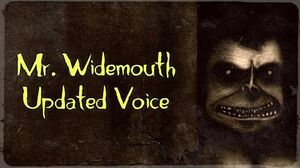 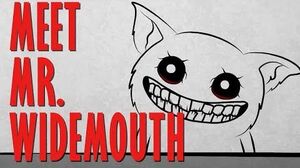