Villains Wiki
Register
Don't have an account?
Sign In
Advertisement
in: Crime Lord, Game Bosses, Beat'em Up Villains,
and 28 more

Leader of The Syndicate

Corrupt the city with crime and take over it.

Kill Blaze, Axel, and their friends.
Replace all city authorities (primarily the Police Chief) with robots and take over the city by planting bombs everywhere.

Mr. X is the enigmatic leader of The Syndicate, but his past and true identity are a complete mystery. The Syndicate have taken over the unnamed city where the game takes place, having bribed all authorities and even the police force. Three police officers, Adam Hunter, Axel Stone and Blaze Fielding, give up their badges, deciding to take on the Syndicate by themselves, with the only help coming from a fellow policeman who did not accept the Syndicate's bribery. They beat all of the Syndicate's thugs, confronting Mr. X in his mansion. He initially offers them a position within the Syndicate, but upon their refusal confronts them, ending defeated and with his reign of terror over.

A year has passed since the fall of Mr. X and his Syndicate, and the city was at peace. Suddenly Axel and Blaze are called by Adam's brother Eddie "Skate" Hunter, who tell them his brother have been kidnapped. They soon find out Mr. X is back and seeking revenge upon them, having kidnapped Adam and sent his henchmen to weak havoc in the city again. Axel and Blaze are then joined by Skate and Adam's friend Max Thunder, deciding to once again take on the evil crime lord.

They confront Mr. X on his secret island, as he sends his top henchman Shiva to take on the heroes. As Shiva is defeated, Mr. X decides to fight, in the same way he did in the first game. He is once again defeated, this time being apparently killed.

The storyline in the Japanese and American versions of the game are completely different. In both versions, however, Mr. X appears in the same manner, having been reduced to a mere brain inside a vial with liquid.

In the American version of the game Streets of Rage 3, Mr. X founds the RoboCy Corporation, which serves as a front for the Syndicate's operations. With the help of a scientist called Dr. Dahm, he starts creating robot duplicates to replace all authorities in the city, while at the same time placing bombs throughout the city to keep the police force busy, and restructuring the Syndicate as Neo-Chaos. A RoboCy researcher called Dr. Zan discovers Mr. X plans and decides to join forces with Axel, Blaze, and Skate to stop Mr. X's plans.

In the Japanese version of the game Bare Knuckle 3, the Syndicate managed to get hold of a large quantity of a radioactive element called Rakushin. Intending to spark a global scale war and profit by smuggling the material, Mr. X orders the kidnapping of General Petrov, who was against the use of the Rakushin, and sends Shiva disguised as the general to start the war, while he places bombs full of Rakushin all over the globe. Axel, Blaze and Skate are contacted by Dr. Zan, who reveals Mr. X's plot to them. When the heroes rescue General Petrov he reveals Dr. Zan is actually the creator of Rakushin, though he never intended for his discovery to be used for evil purposes.

In both storylines, Mr. X is confronted in a secret factory, where he activates his bombs and sends a robot to fight them. After the robot is destroyed, the vial where Mr. X's brain was shatters, killing him for good, and the bombs are thankfully disarmed in time before detonating.

Although Mr. X is deceased, his legacy stills lives on, passing it down to his siblings, the Mr. and Ms. Y, who take over as the new main antagonists, and their syndicate, the former still made a few cameos in the game, with one of them being a secret mini-boss battle in one of the retro stages that's accessed by using a taser on the Bare Knuckle arcade machine in the eighth stage. Mr. X also appears as an enemy that's randomly fought in the game's Survival Mode DLC, using his sprites from the first Streets of Rage.

Given his mysterious nature, there's somewhat of a limit to the insight of Mr. X's personality. His actions and goals, however, provide a very detailed insight to the type of person he is. Given the size of his syndicate, he is a very manipulative and charismatic villain, able to recruit even the most unlikely individuals to his law-breaking cause.

Mr. X is also shown to be a relentless fighter, as in the first two games, he is very hard to take down and does a lot of damage to the heroes, though he solely uses his gun in both fights. He will open fire with his machine gun and happily mow down his own men with no remorse or hesitation in even the slightest attempt to shoot the heroes.

Streets of Rage 3 shows an even more relentless side to Mr. X, being reduced to a brain in a vial, he still stops at nothing to spread his crime across the city, displaying unspeakably large amounts of power despite the state he is in. When finally defeated, he begs the heroes to help him, a plea that obviously falls on deaf ears.

Mr. X appears as one of the four playable Streets of Rage characters in SEGA Heroes. 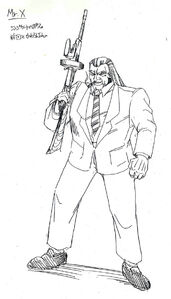