Control over his fighting bots and his thugs

Win as many bot-fights to become rich as he can.

Get revenge on Hiro.
Defeat Big Hero 6 (all failed).

Mr. Yama is a supporting antagonist in Disney's 54th full-length animated feature film Big Hero 6 and the secondary antagonist of the first season of Big Hero 6: The Series. He is a San Fransokyo crime lord who develops a grudge against Hiro Hamada after losing to him in a bot-fighting match, and a frequent enemy of the superhero team known as Big Hero 6.

He is voiced by Paul Briggs, who is also the head story writer of the film.

Mr. Yama is first introduced as the undisputed bot-fighter champion in San Fransokyo's illegal bot fights with his prize robot, Little Yama. After defeating an unfortunate contender girl, Hiro Hamada shows up and asks if he can participate with his own robot. Yama, underwhelmed by Hiro's naive demeanor, agrees to fight the boy. When Hiro's bot seems to collapse after the first round, Yama is about to gloat in his victory until Hiro bribes him with more money for a rematch. The confident Yama accepts this and the match restarts.

However, Hiro's bot is revealed to be highly advanced, quickly repairing itself and destroying Little Yama with ease, much to the shock of Yama and the entire audience. Hiro brazenly boasts about his victory against Yama, but this only made Yama so angry that he orders his goons to beat up the boy out of spite. When the group seems to have Hiro cornered, Hiro's brother Tadashi rescues him on his moped away from the goons.

The brothers, along with Yama's gang and everyone in the bot fights, are caught and arrested by the San Fransokyo police during the escape. Yama and his gang are forced to share a cramped cell with Tadashi, while Hiro has a separate cell to himself due to being a minor. Hiro and Tadashi are released that same night on account of their aunt Cass, while Yama and his gang are presumably left in prison for the rest of the film.

In "Baymax Returns", Yama and his thugs are seen threatening a man for not giving them enough money, before he is ordered by Obake to acquire a sculpture from the San Fransokyo Institute of Technology. While scheming up ways to get the sculpture, Yama and his men come across Hiro and Baymax's out-of-control skeleton, and, wanting to get revenge on the former, Yama has him hung off of a roof. After noticing Hiro's SFIT ID card, Yama decided that he could be used to acquire the sculpture and forced Hiro to help him by holding Baymax hostage. With help from Fred, Hiro manages to get the sculpture for Yama.

However, he refuses to give Baymax back and instead decides to still teach Hiro a lesson. Before this can happen, Honey Lemon, Wasabi, and GoGo break into Yama's office and rescue their friends, freezing Yama in the process. Despite losing the sculpture, Yama succeeds in making several copies of Baymax to serve him.

Later, he enters an elevator, which Obake takes control of before trying to kill Yama for failing him, although he is spared when he claims he has something even better. Yama then presents his army of Baymax copies, which Obake sees potential in, yet still demands that the sculpture is recovered. Sending several of his robots into the city to cause havoc as a distraction, Yama and his remaining robots infiltrated SFIT to obtain the sculpture.

The original Baymax infiltrates the group during their raid of Professor Granville's office and acquires the sculpture, although he accidentally reveals himself when Yama hits his head and alerts him to the need for medical attention. Yama takes the sculpture from Baymax and it ends up breaking, revealing that it is actually a powerful energy source that can empower and eventually overcharge anything electronic it attaches itself to, as it demonstrates with one of the Baymax copies.

Yama escapes with the sculpture and calls Obake, demanding to know why he wasn't told what it could do, resulting in Obake remarking that a "dog" doesn't need to know or ask what it is fetching for its master. As Big hero 6 pursues Yama, the sculpture melts through his pocket and attaches itself to a train (which Hiro's Aunt Cass happened to be on), causing it to go out of control. Yama is ultimately left empty-handed when the sculpture is destroyed.

Yama raging at Hiro for humiliating him.

Yama, his gang, and Tadashi stuck in prison. 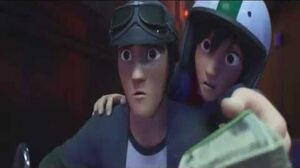