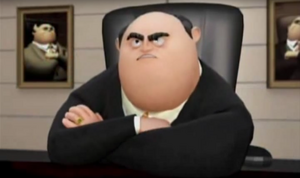 Mr. Z is the main antagonist in the videogame Rampage: Total Destruction. He is the CEO of Scum Soda, the company responsible for transforming people into monsters.

At the beginning of the game, Mr. Z and his associates are watching a video of man named George trying Scum Soda. At first, George complimented the drink for its taste, but then passes out behind a table and transforms into a giant gorilla as his monstrous arm emerges. The worker showing the video explained that a few individuals had a "negative reaction" to Scum Soda, though assures Mr. Z that they are handling it. However, Mr. Z abruptly asked how many people tried Scum Soda. As the worker answers 30 (40 in the Wii version of the game), Mr. Z goes on a tirade that Scum Labs will be ruined once the press gets a hold of this. However, the worker explained to Mr. Z that they managed to contain the situation, as a scientist reveals that the monsters are hidden inside cryogenic frozen tubes. The worker then states the plan for Scum Soda when the mutated George from earlier appears behind him from outside of the building and grabs him in his fist. As Mr. Z and his associates watch in terror, Mr. Z tells them that they have a problem.

Retrieved from "https://villains.fandom.com/wiki/Mr._Z?oldid=3395013"
Community content is available under CC-BY-SA unless otherwise noted.