Worshiping God as a stern and bloodthirsty deity.
Embracing the notion of expiation and sacrifice.
Seeking self-worth.

Survive the Mist and it's nightmarish horrors at all costs.

Kill David Drayton and his fellow survivors for their "blasphemous" disbelief (all failed).

Mrs. Carmody ("Mother Carmody" as she called herself) is the main antagonist of the 1980 Stephen King novel The Mist, as well as the 1985 interactive fiction computer game and 2007 supernatural horror film adaptation of the same name.

She was portrayed by Marcia Gay Harden, who also played Dana Lewis in Law & Order: SVU.

In the film, she is shown to be a reclusive and distant woman who passionately preaches about God. When offered companionship by one of the people trapped in the market, she vehemently denies this friendship, stating that her only friend is God and proceeds to call her a whore, even though she did nothing wrong. As more creatures appear from the Mist, she manages to escape possible death from a large fly by citing quotes from the Bible (though in truth it was merely cause she managed to hold still long enough the creature decided to move on). At this point, she starts to amass more followers, and after David and the rest of the group return from a local pharmacy, one of David's members, Jim, fully crosses into Carmody's cult, having lost his mind after the traumatic encounter with Grey Widows. Once the soldier who was amongst the group confesses to this being a military experiment gone wrong and the creatures are in fact from another universe altogether, Carmody rants about this being humanity's punishment from God, and uses her power to turn the group against the poor man, where he ends up stabbed and thrown out to the mist, where he is cruelly left to be eaten by the creatures.

David, Amanda, and a few others had enough of this, and attempt to steal food and make a getaway to David's truck. Carmody blocks the doorway and becomes so corrupt by her own powers she commands the rest of the brainwashed followers to send Amanda and an innocent boy outside to their deaths, merely cause Carmody doesn't like them. Ollie, seeing she's too far gone, puts two bullets in her. Breaking her corrupted power and the others stand aside.

Before the Mist appeared, Mrs. Carmody owned an antiquity shop called Bridgton Antiquary, and her father hunted and taxidermised animals.

She is one of the patrons trapped in the Food House grocery store when the Mist appears and engulfs the town outside, and is convinced that the Mist is a punishment from God for mankind's sin and dissolution; particularly after David and Ollie explain their encounter with the "Tentacles from Planet X" in the storage room, which involved the death of an unfortunate store employee, Norm, despite David having tried desperately to save him.

Mrs. Carmody attempts to convince the other market patrons that the Mist is a divine punishment, but is stopped when she is hit her across the face by Amanda, who Carmody had earlier insulted just for trying to be nice to her, and threatened by Ollie. However, Mrs. Carmody shows no fear of Ollie's threat, and predicts that the creatures in the Mist will claim another victim at night (which is proven true, but it more likely was just a coincidence).

Initially appearing as a God-fearing Christian who wishes to evangelize people, Mrs. Carmody eventually reveals her true colours as she wishes to get rid of people who do not agree with her, even to the point of murder.

After the creatures invade the supermarket, one of them lands on her chest but it gradually flies away when she manages to hold still, making various people believe that she is divinely protected by God.

Instead of being weakened by the siege mentality caused by the Mist, Mrs. Carmody is strengthened by it, and by the second day, she successfully gains a small group of followers, all of whom are driven mad by the trauma of the phenomenon as well as the isolation within the supermarket, which quickly grows into a congregation.

After a traumatic encounter with giant spiders called Grey Widows at nearby pharmacy, Jim Gondin can no longer cope, and crosses over to Carmody. Even becoming hostile to his close friend Myron, and former teacher Irene.

Jim later brings her Private Jessup, a local American soldier who was also holding out in the store, getting Jessup to reveal the truth about the Mist, that it came from experiments in the secretive Arrowhead Project held at a military base within the hills to open portals to other dimensions, only as a "window" to see what lies on the other side, Mother Carmody (Mrs. Carmody) in her anger said "Well, maybe your 'window' turned out to be a door, didn't it?". She blamed the military and their scientists for being haughty fools for going against God and his forbidden rules of old by disrupting the laws of nature and opening doorways that are better left unopened. She even ordered her cult to sacrifice Private Jessup, who was merely in the area and never directly involved, to the creatures outside. One of her cult members brutally stab him in the stomach, for a brief moment Carmody is shocked by this behavior, but this brief moment of remorse doesn't last and she orders them to throw Jessup to the creatures, which they do. Poor Jessup desperately begs to be let back in, but is ultimately killed by a giant lobster like creature, assumably the same creature that killed the biker from earlier. This cruel act of murder was ultimately pointless, and more likely just drew all the more attention.

When a small group of people (led by David) that was against Mrs. Carmody, decided to leave the supermarket and go for help, she attempts to stop them and gathers her cult, who are mostly armed with weapons. After criticizing the rational group about how they have mocked her beliefs and lifestyle, Mrs. Carmody (having officially lost her mind) orders Amanda and Billy, David's son, be sacrificed, whilst the rest of David's group be murdered in the process. However, as the mob surrounds the group, assistant manager Ollie Weeks thwarts her and her group's murderous attempts by shooting her in the stomach. As Mrs. Carmody's confused and horrified followers scatter, Ollie, in the heat of the moment, shoots her in the head, killing her and silencing her for good, which also avenges Jessup, whom she ordered to be sacrificed. The rest of her cult, realizing what they have done, breaks out of their brainwashed state and allow David's group to leave, though one member expresses grief over Mrs. Carmody's death and furiously accuses Ollie Weeks of being a heartless murderer. 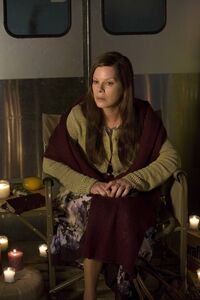 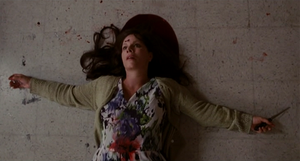 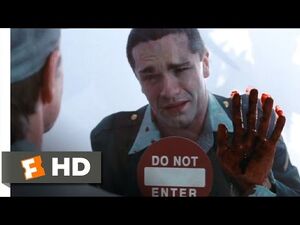 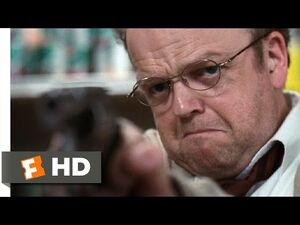