Poisoning her daughters to receive attention for herself.

Keep Kyra and her sister sick.

Remain undiscovered in her role over her daughter's death (all failed).

Mrs. Collins is the foremost villain in the 1999 psychological/supernatural thriller film The Sixth Sense.

She was portrayed by Angelica Page.

Mrs. Collins lived some miles outside of Philadelphia, was married to Mr. Collins, and had two daughters with him, the oldest of which was named Kyra. For about two years before the events of the film, Mrs. Collins began deliberately making her daughter Kyra sick. She presumably suffered from Munchausen's Syndrome by proxy, which caused her to make her children sick in order to gain attention for herself. It is unknown what exactly caused her to tick and begin poisoning her daughters, or even if she made Kyra sick in the first place. Some time before the events of the film, Kyra used a video camera to film a dollhouse set she had before her mother came in to give her lunch; the camera caught Mrs. Collins mixing Kyra's soup with Pine Sol, a disinfecting agent, before Kyra ate. Kyra eventually succumbed to the illness her mother caused her to have, and soon after she died, her ghost began haunting a young Philadelphia boy named Cole Sear.

Sear, with the help of his psychologist Dr. Malcolm Crowe, went to the town where Kyra lived and died . During the funeral at the Collins house, it was mentioned that Kyra's younger sister was beginning to get sick. Kyra's ghost gave Cole a wooden box, which he gave to the grieving Mr. Collins. Mr. Collins opened the box which contained the video tape that caught his wife poisoning their daughter. Mr. Collins confronted his wife shortly in utter horror after he and several others at the funeral watched the tape.

Given how her role in her daughter's death was exposed, it can be widely assumed she was immediately arrested and imprisoned for killing her daughter. 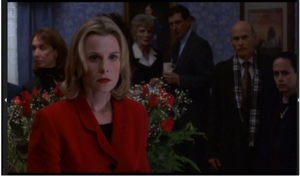