Mrs. Dodds (real name Alecto) is a minor antagonist in the 2005 book Percy Jackson and the Olympians: The Lightning Thief and it's 2010 film adaption.

She is portrayed by Maria Olsen.

She is a Fury sent by Hades to find Percy Jackson, who is suspected to have stolen Zeus's master bolt and Hades' Helm of Darkness. She manages to infiltrate his school Yancy Academy by impersonating a math teacher named Mrs. Dodds.

Some times later, Mrs. Dodds accompanies Percy's class during a school trip to a museum along with her colleague Mr. Brunner. During a lunch break, she witnesses Percy unintentionally make water from a nearby fountain grab the class bully Nancy Bobofit (who is Mrs. Dodds' favourite student), after she picked on his friend Grover Underwood. Mrs. Dodds then demands Percy to come with her into the museum. Percy follows her, but she turns back into her true appearance on the top of a scaffolding and attacks him. Luckily, Mr. Brunner, who is actually the centaur Chiron, enters the room and throws a pen to Percy, which turns into a sword. Percy uses the sword to stab Alecto, who vaporizes.

However due to being a monster, Alecto doesn't stay dead for long and returns to her form as Mrs. Dodds alongside her two fellow Furies to pursue Percy, Grover and Annabeth Chase during their quest to find Zeus' thunderbolt. Alecto attacked the trio on a bus, causing them to run away without supplies and having to go on the run. Towards the end of the novel, Alecto witnessed Ares' confession of stealing the helm and the thunderbolt, she greeted Percy and returned to Hades with the helm. 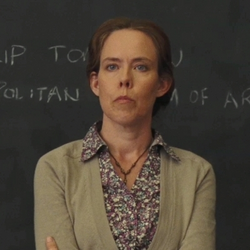 Mrs. Dodds disguised as a human.