Mrs. Gregory is a twist villain and a one-time character from the 2016 reboot of the Cartoon Network animated series The Powerpuff Girls, only appearing in the episode "The Bubbles-Sitters Club". She is a member of Pug-Faced Paulie's gang of Pug Thugs.

She was voiced by Andrea Martin, who also played Miss Meany in New Woody Woodpecker Show.

Bubbles wanted to prove to The Professor that she was responsible enough to own a dog, by dog-sitting for the neighbors. She dog-sat for an old lady, who lived in the neighborhood, named Mrs. Gregory, and took care of her pet dog named Paulie. Mrs. Gregory seemed to be a bit of a creep, as she did not talk to Bubbles or even smile. When Bubbles thanked her for allowing her to pet-sit for her, she gave her a creepy scowl and slowly closed the door on her.

It soon came about that Paulie was actually a notorious criminal named "Pug-Faced Paulie", and he was just pretending to be a normal dog, to lay low from the police. He blackmailed Bubbles and forced her to join his gang.

In a fight that transpired later, it turned out that Pug-Faced Paulie had an entire gang of Pug Thugs working for him. One of which was Mrs. Gregory. Bubbles assumed that Mrs. Gregory was a human being and inquired as to why she was working in a gang of dogs. Mrs. Gregory revealed to her, that she was not a human being, but rather, she was a half-dog, half-duck hybrid in disguise as a human being. She and Paulie helped explain to Bubbles that she was helping Paulie with hiding from the police, by pretending to be his human owner, so she could help cover for him, and keep him out of trouble with the police.

Now that Bubbles knew her true colors, Mrs. Gregory fought with her, along with the other Pug Thugs, using her true form. She admitted that not even she understood what kind of creature she was, as this half-dog, half-duck hybrid was ridiculously confusing for her, and she had no idea what to make of it. She was punched out by Bubbles very quickly, and as she laid on the ground, moping and griping in pain, she asked herself, "What am I?", as one of her most internalized struggles was trying to figure out, what kind of messed up creature she was, and where she came from.

After The Powerpuff Girls defeated The Pig Thugs, the police came in and promptly arrested all of them. Although Mrs. Gregory was not seen, being arrested, other members of the gang were shown, being arrested, so it can be implied that she too, went to jail. 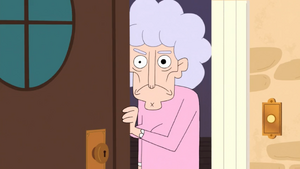 Mrs. Gregory being creepy and aloof. 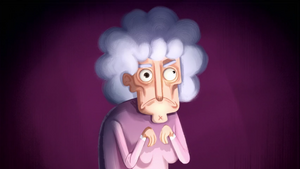 Close of up Mrs. Gregory. 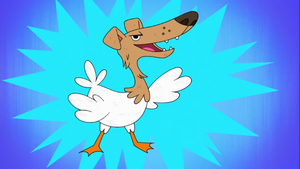 Mrs. Gregory revealing her true self.