To get out Charlene of Peter Sanderson's house.

Mrs. Kline is Peter Sanderson's nosy but bigoted neighbor who lives across the street from his house, and a minor villainess in the 2003 comedy movie Bringing Down the House. She is also the sister of Mr. Sanderson's employer at the law firm where he worked.

She was portrayed by the late veteran actress Betty White.

Mrs. Kline loves gardening. She also tends to be a bit nosey sometimes, mostly towards people of different ethnic and national backgrounds whom she talks smack about. 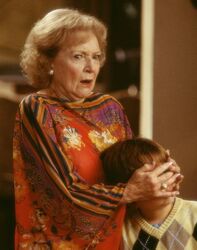