Turning corpses into pies and making money by selling them.

Have Todd for herself (failed).

Nellie Lovett (also known as Mrs. Lovett) is the secondary antagonist of the 1846-1847 story The String of Pearls, and the deuteragonist of the 1979 musical Sweeney Todd: The Demon Barber of Fleet Street and the 2007 live-action film of the same name. She is the owner of a bakery who was in league with Sweeney Todd until her death.

In the original 1979 Broadway release, Angela Lansbury portrayed Mrs. Lovett, who also portrayed Mrs. Iselin in The Manchurian Candidate. In the 2004 Broadway Revival, Mrs. Lovett was portrayed by Patti LuPone who also portrayed Yellow Diamond in Steven Universe and Joan Ramsey in American Horror Story: Coven. In the 2007 film, she was portrayed by Helena Bonham Carter, who also played the Red Queen in Tim Burton's Alice in Wonderland, Bellatrix Lestrange in the Harry Potter franchise, Dr. Serena Kogan in Terminator: Salvation, Skynet in Terminator: Genisys, Dr. Julia Hoffman in Dark Shadows, and Madame Thénardier in Les Miserables. In the 2012 West End revival, she was portrayed by Imelda Staunton, who also played Dolores Umbridge in the film adaptation of Harry Potter and the Order of the Phoenix, and Alexandrina Victoria Hannover in The Pirates! In an Adventure with Scientists! .

The String of Pearls

Mrs. Lovett was involved in Sweeney Todd's plan of killing his customers by throwing them down a trapdoor and breaking their necks. Mrs. Lovett made them into meat pies and sold them for money.

Mrs. Lovett first appeared when Todd returned to London, where she explained to him how his wife Lucy poisoned herself after being raped by Judge Turpin, who has taken in Todd's daughter Johanna as his ward since he planned to marry her for himself. This drives an angry Todd to form a plot to kill Turpin in revenge for this.

When Adolfo Pirelli was killed by Sweeney in a failed attempt to blackmail him, Mrs. Lovett offers the idea to bring the business up by cutting the bodies up and bake them into her meat pies; even taking Pirelli's assistant boy Tobias Ragg as her own. Todd eventually tags along with this after his failed attempt to kill Turpin, murdering several customers (but only those who are single men with no families, as Todd spares any men who have wives and/or children) and allowing Lovett to use the bodies to cook up her pies for profit.

When business was up, she told Sweeney that she would like to marry him and retire. Then in a series of events, Mrs. Lovett locked up Toby in the basement where she cooks the bodies and he escaped through the sewers. When Todd finally killed Turpin, along with Beadle Bamford and a beggar woman, Turpin was alive for a few seconds and grabbed Lovett's dress, causing her to scream just as Turpin bleeds to death. Todd rushed to see what was going on. He then tells her to start the oven and looks over the beggar woman and discovered it was Lucy. Lovett then confesses that the poison made Lucy slightly crazy and that she lied to Todd only because she loved Todd. At first, Todd pretends to forgive her and then waltz her towards the oven but kills her by tossing her into the fiery oven. 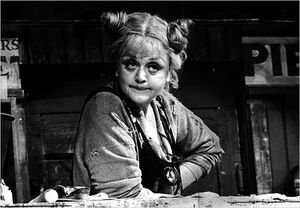 Angela Lansbury as Mrs. Lovett in the original stage play. 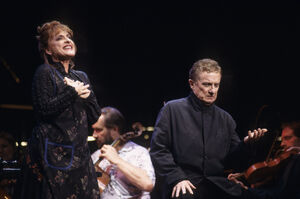 Mrs. Lovett and Sweeney Todd portrayed by Patti Lupone and George Hearn in 2001 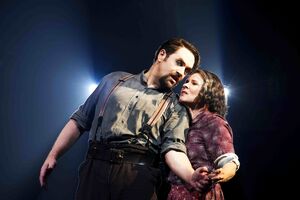