Pass SpongeBob from her class (ongoing).

Poppy Puff, or better known as Mrs. Puff, is one of the main characters of SpongeBob SquarePants. She is the teacher of the titular character at her own boating school. She is a paranoid pufferfish who wears a sailor uniform.

Mrs. Puff is friendly to almost all of her students, but she is constantly tormented by SpongeBob to the point of mental instability. She occasionally acts as an antagonist/anti-villainess due to SpongeBob's reckless driving. However, being a teacher, she still cares about him depending on the episode and is highly patient with him whenever he doesn't cause her trouble. On average, her general characterization has become more negative over the series' run, growing increasingly hateful and afraid towards SpongeBob on occasions, even developing somewhat of a phobia. This is most likely due to years of having to put up with SpongeBob's failures and the trouble he has caused. However, Puff has never outright told SpongeBob that she dislikes him nor that he will never get his driver's license; while still largely SpongeBob's, it can be argued that her suffering is partially her fault as a result of this.

While most see Mrs. Puff's criminal record as largely SpongeBob's fault, it should be noted that she had this record before even moving to Bikini Bottom. Some of Mrs. Puff's statements in "No Free Rides" indicate that she has been forced to move and change her name as a result of her criminality at least once.

Unfortunately, the show's flanderization in post-first-movie seasons (Season 4-Season 9) saw her portrayal reach a controversial point, notably in "Demolition Doofus" where she displayed a murderous breakdown in her attempt to kill SpongeBob for his incompetence and role in her inability to inflate. Although it appeared that Mrs. Puff was about to commit a genuine act of Moral Event Horizon and cemented her status as a villainess in process, the aforementioned portrayal was in truth, ridiculously irrational on the same vein with Squidward in both "Good Neighbors" and "The Little Yellow Book" as well as Mr. Krabs in "One Coarse Meal" taking into accounts of how she made efforts in her own part in ensuring her student's success.

She is voiced by Mary Jo Catlett. In the Broadway musical adaptation, she was portrayed by Abby C. Smith.

Some small, early examples of Mrs. Puff's antagonism can be seen in the season one episode "Scaredy Pants". In the said episode, Mrs. Puff makes fun of SpongeBob for his fearful behavior during Halloween by calling him "ScaredyPants" just like the others after startling him with her car's horn. As with those who made fun of the sponge, Mrs. Puff gets a taste of her own medicine where she is terrified by SpongeBob's own terrifying form resulted from Patrick shaved upper half of his body to the point of him skinless and has eyes, brain, and mouth exposed in a disturbing way just to further convince his cheap Flying Dutchman disguise.

The episode "Sleepy Time" features Mrs. Puff in an antagonistic role where she tears SpongeBob's driving license into pieces. However, this technically doesn't count since said "Mrs. Puff" was part of SpongeBob's own dream.

In "No Free Rides", in addition to the aforementioned unspecified criminal record which forced her to move and change her identity at least once, Mrs. Puff finds herself resorted to steal SpongeBob's new car after passing him from her class just to get rid of him for good. Deep inside, however, she fears that SpongeBob will destroy the town because of this mistake, yet whether she genuinely wants to ensure the safety of the Bikini Bottomites or just wants to stop SpongeBob to save her job is up for debate. Anyway, Mrs. Puff sneaks into SpongeBob's boatmobile and drives off with it, unaware that her student is sleeping in it. The two get into a fight and SpongeBob eventually discovers who the thief is. The boat crashes into a police car and Mrs. Puff ends up in jail.

In "The Bully", Mrs. Puff has another antagonistic role where she proved herself not a reliable figure when it comes about dealing bullies in her class. Contrary to statements where she seemingly let Flats the Flounder on his way for beating SpongeBob as the revenge for troubles the sponge caused to her (like the fact that Mrs. Puff specifically told Flats that it was SpongeBob the one reporting him to her), astute watchers can easily pointed out that this is out of poor character judgment instead of malice even from the episode's first few minutes:

Post-First-Movie Seasons show Mrs. Puff involved in other small antagonistic acts which, due to the show's flanderization, increasingly negative and harmful that she would normally. In "Nautical Novice," Mrs. Puff is on a bus when she sees SpongeBob trying to catch up to her. She tells the bus driver to keep driving rather than stop for SpongeBob, despite the danger SpongeBob is in (he is running in the middle of the road).

In "Boating Buddies," a temporarily-handicapped Squidward cannot pick up his pencil because of his bandages, rendering him unable to complete Mrs. Puff's test. Rather than supply Squidward an alternative assignment or more time, Mrs. Puff instantly fails him at the end of class, forcing Squidward to endure another week of sitting next to SpongeBob. While this gullibility is somewhat reminiscent to the one she displayed in "The Bully", this one took it to more extreme levels, as Mrs. Puff proved to be really unfair with Squidward, even though he hates SpongeBob just like her.

Some later episodes of the series show that Mrs. Puff has become increasingly violent, and she occasionally resorts to violence as a first. In "SpongeBob LongPants," Mrs. Puff hears that another driving instructor has passed SpongeBob. She panics, saying that it is the "end of the world", then starts to lock her doors, bar her windows, and collect rations, showing that she has also become more paranoid. She is last seen holding a large harpoon and wearing a war helmet before calming down and deflating when she hears that the pass is false.

"Demolition Doofus" sees the worst turn in Mrs. Puff's flanderized role, as well as the most controversial and ridiculously out of character one. After one of SpongeBob's failed attempts at driving, Mrs. Puff's inflation sac is ruptured and she is told she can no longer inflate, resulting in her hatred of SpongeBob to skyrocket. While at the hospital, she sees injured demolition derby drivers and enters SpongeBob in the annual demolition derby, hoping he will die in a desperate attempt to rid her life of SpongeBob. However, SpongeBob survives (due to his reckless driving) and becomes a star, much to Mrs. Puff's displeasure. She then snaps and crosses the Moral Event Horizon by driving a large monster truck and attempting to murder SpongeBob herself. Mrs. Puff finally regains both her sanity and puffing ability after crashing into her boating school.

As the show's flanderization progressively deteriorated qualities in characters and storyline in it, not even Mrs. Puff's portrayal that escape this degradation: In stark contrast of "Doing Time" where Mrs. Puff tries to beg the police to not arrest SpongeBob and stating that he is "just a student driver" and thus does not deserve to be arrested, "Oral Report" has her evilly laughs and tells SpongeBob while saying, "Finally! The long arm of the law's caught up with you! I guess I won't be seeing you in my driver's education class for the next 5 to 10 years!" when the police confront SpongeBob. Not only this (coupled with "Demolition Doofus" shows how contrasted her portrayals in between Pre-First-Movie Seasons and Post-First-Movie Seasons), but also among degradation of shows itself after the departure of original crews of the show's creators, was what culminated with Stephen Hillenburg's return to revise the series.

Despite that Mrs. Puff was reverted back to her Pre-First-Movie Seasons portrayal after Hillenburg revised the series, a deleted scene of The SpongeBob Movie: Sponge Out of War included Mrs. Puff chasing SpongeBob and Plankton over the apocalyptic Bikini Bottom possibly with intentions to kill them before giving SpongeBob an F- after crashing. However, the scene had to be removed due the directives of Paramount Pictures, perhaps to not depict Mrs. Puff's controversial antagonistic side again. One could assume that they also removed it for being unsuitable for kids. 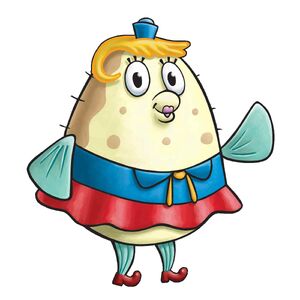 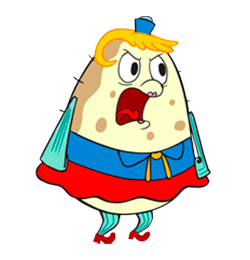 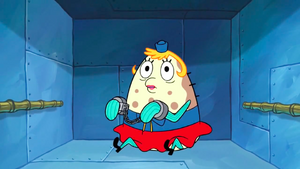 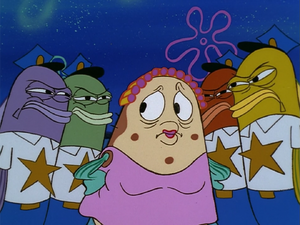 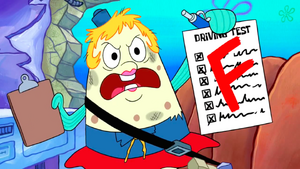 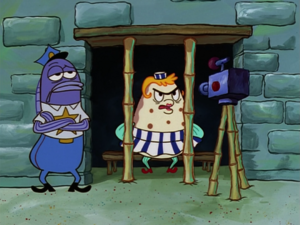 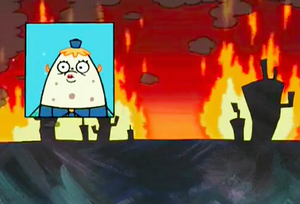 Mrs. Puff imagines herself on TV 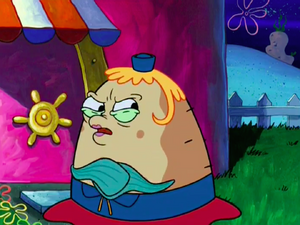 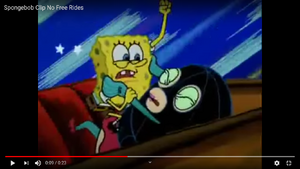 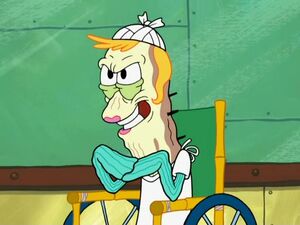 Mrs. Puff plotting an evil plan to kill SpongeBob and her Evil Grin.