Attempted Murderer
Mrs. Two-Toes is a recurring villain from the Netflix original series, Paradise P.D. She is the mother of Terry Two Toes, who acts just as violent and messed up as he is. She vows revenge on the cops of Paradise Police Department for arresting (and killing) her son.

She is voiced by Grey Griffin.

Mrs. Two-Toes first appeared in "Welcome to Paradise", when Kevin kindly interviewed her on her son, Terry Two Toes, hoping to get some valuable information on him so that he could arrest her. Mrs. Two-Toes described terry as being a normal little boy when he grew up. The things she listed him doing, that she saw as being completely normal were burning down churches, microwaving frogs, and putting rat feces in his teacher's coffee. Kevin asked if she knew of anyone else who could tell him about Terry and Mrs. Two-Toes pretended to happily reach for her address book, when in actuality, she was grabbing her chainsaw, which she attempted to kill Kevin with. Fortunately for Kevin, he used his stopsign to block her chainsaw and then grabbed a stone chicken statue off of the table next to him and knocked her out cold with it.

In "Police Academy", Mrs. Two-Toes paid a visit to Robby and Delbert at their crackhouse and gave them the burner phone to the argyle meth company. She said that in lieu of the recent death of Terry Two-Toes, someone else needed to take over as first respondent to the kingpin. When asked why she wasn't in prison for attempted to murder a cop, Mrs. Two-Toes simply claimed that she was "on her way".

In "Christmas in Paradise", Dusty got arrested and sent to a women's prison. Coincidentally, he just so happened to be sent to the same prison cell as Mrs. Two-Toes. When he got in there, Mrs. Two-Toes recognized him as a cop at the police academy that arrested and killed her son and she threatened to get revenge on him just for being associated with them.

In "Paradise Found", Mrs. Two-Toes tortured Dusty in prison by shanking him but still waited for Dusty to fall asleep for her moment to actually go in for the kill. When Dusty fell asleep on the top bunk and around this time, a prison guard gave her a totally non-suspicious sub sandwich, that was sent to her by a friend. (whose identity was never revealed but was most likely to have been Fitz) Mrs. Two-Toes found a giant machete in the sandwich but instead of using the machete itself to kill Dusty, she used it to whittle her toothbrush into a shank to kill Dusty. She sat on the bottom bunk of the bunk bed as she took a long time to whittle her shank. Just then, the bunk bed broke under Dusty's crushing weight and Dusty came crash landing down on Mrs. Two-Toes, killing her without him even trying to kill her or even knowing that she was up to no good. 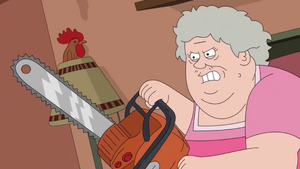 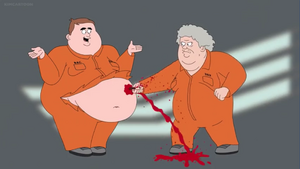 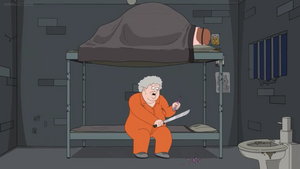