Ms. Frizzle is a minor villain from Robot Chicken who appeared as the main antagonist of the sketch "The Magic School Bus Final Adventure" from the episode Cake Pillow. She is based on the Magic School Bus character of the same name.

She was voiced by Arielle Kebbel.

She was driving on the Magic School Bus to take her students to the Grand Canyon. Everyone was excited, except for Arnold who reminded Ms. Frizzle that she said they were going to the natural history museum, much to the other students' disapproval. Ms. Frizzle denies this saying that magic school buses "don't do standard curriculums." Arnold begins to believe that Ms. Frizzle is "bat-sh*t crazy", and questions if she actually has a teaching degree. Ms. Frizzle answers that "It's honorary", and tells her students to put their seat belts on, as they do so, but Arnold is shocked that no one else was already wearing their seat belts before.

Ms. Frizzle then hits the gas on the Magic School Bus driving straight to a dead end area and to the edge of the canyon. Arnold is horrified, reminding Ms. Frizzle that they're driving to the end of the road, but Ms. Frizzle says, "Where the road ends, adventure begins! Bus, do you're stuff!" as she gets the bus to fall right passed the edge so they can crash down the bottom of the canyon and die. Then the bus floats up with wings and a halo as an angel, with Ms. Frizzle and the students as angels as well. Ms. Frizzle concludes to Arnold that "Adventure awaits in heaven!", with Ralphie saying "See Arnold? You pussy!" as the bus floats up to the light leading to Heaven. 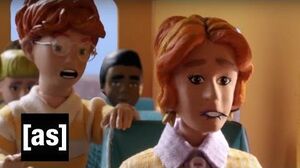 Retrieved from "https://villains.fandom.com/wiki/Ms._Frizzle_(Robot_Chicken)?oldid=4165479"
Community content is available under CC-BY-SA unless otherwise noted.